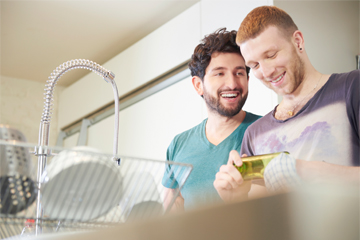 Want to reduce susceptibility to allergens? Lock up that dishwasher and break out the gloves.
Tara Moore/Getty Images

Little kids can be so grubby. They pick stuff up off the floor and cram it in their mouths before you can even figure out what they've got. Children eat dirt, bugs and dog food, and still they manage not only to survive, but to thrive. In fact, the dirtiest kids often appear the healthiest. How is that -- and more importantly, what does it have to do with hand-washing the dishes and allergies?

The answer, in a word, is microbes -- tiny organisms so small that billions of them could fit on the head of a pin, even alongside all those dancing angels. Microbes are in the air, inside people and in the food we eat. They can be both helpful and harmful to humans, and in the ranks of the latter we include bacteria that can cause illness [source: Microbe World].

It's commonly accepted in the scientific community that microbial exposure early in a child's life can help reduce the development of allergies and asthma later in life. This is part of the "hygiene hypothesis" that says kids in many First World countries are growing up in environments that are too clean. Because of an early lack of exposure to dirt, grime, germs, microbes or whatever else you want to call it, kids are not building up the proper immunity to keep allergies at bay [source: Thompson].

Studies have shown that children raised with pets or on farms have measurably fewer allergies than do kids raised in cleaner environments. And it looks like one more way to transfer a few germs to your children -- all in the name of keeping them healthy -- has been found: hand-washing the dishes.

And no, this isn't a call for child labor. In fact, it's not the act of hand-washing itself that boosts the immune system – It's actually eating off dishes that haven't been thoroughly sanitized by a machine dishwasher. In fact, to be most helpful at keeping allergies and asthma at bay, exposure to microbes needs to start long before a child is old enough to help with the dishes -- the younger, the better.

In order to completely sanitize dishes -- to remove all the germs, bacteria and microbes -- dishwashing water must reach 140 degrees Fahrenheit (60 degrees Celsius). Human hands can't bear this scalding temperature, which is well above what most people set their in-home water heaters. Machine dishwashers, however, have built-in water heaters to raise the water temperature to sanitizing levels. This makes dishes clean enough to eat off of, but it doesn't leave behind much in the way of microbes to help boost immune systems.

People who hand-wash dishes -- whether all of them, or just grandma's delicate china -- leave teeny organisms behind. The dishes get clean enough to eat off of without concern; they just don't get as clean -- or as sanitized -- as they do in the dishwasher. And it looks like that may be a good thing.

A Swedish study on dishwashing looked at the long-accepted hygiene hypothesis and asked the question: Is there an allergy-preventing effect associated with dishwashing by hand, as opposed to by machine? The researchers sent questionnaires to parents or guardians of all seven-to-eight-year-olds in several cities in different regions of Sweden. They asked questions about eating and dishwashing habits to get an idea of how often people hand-washed dishes; ate fermented foods or bought food fresh off the farm; whether children were breastfed; and how often during the first year of life children were given home-cooked food. In addition, questions covered the number of pets in the home, exposure to cigarette smoking and allergy and asthma symptoms [source: Hesselmar].

Researches sent out 1,838 surveys in 2007 and received answers back from 1,029. One of the stronger relationships researchers found was between dishwashing practices in the home and allergy symptoms. People who hand-washed dishes had children with lower incidences of allergies and asthma. They also found that people who washed dishes by hand often participated in other activities that have been shown to boost the body's ability to beat allergies, such as dining on fermented foods -- including foods common in American diets, like pickles and yogurt, as well as more exotic foods like kimchi and tempeh (fermented soybeans). These same microbe lovers are also more likely to buy and eat foods fresh from farms, which all lead to diets higher in bacteria content than the diets of people not exhibiting these habits and traits [source: Hesselmar].

Other factors associated with reduced levels of allergies have been observed around the world, including overcrowded housing, lower socioeconomic status and immigration status. These are also factors that could have a bearing on hand-versus-machine dishwashing, as those in overcrowded housing, of low socioeconomic status or of immigrant status are not as likely to have access to a machine dishwasher as people who live in single-family homes and have more money [source: Hesselmar].

This should not lead every parent out there who is concerned about allergies in their children to ditch the dishwasher and hit the kimchi, however. One of the downsides to the hygiene hypothesis is that the exposure to germs and bacteria is most beneficial in children younger than six months old. Not only are babies too young at that age to help wash the dishes, they may not even use any. Infants, particularly those who are breastfed, often aren't exposed to hand- or machine-washed dishes or fermented or farm-fresh food until well after six months. There's also no research addressing just how many of your dishes you'd have to hand wash to get the benefit [source: Nierenbert].

In addition, if you've got a sick child or other sick person in the house -- or someone at high risk for food-borne illness because of a weakened immune system – it may be a better choice to sanitize your dishes. The Oregon State University Extension Service suggests taking this extra step to ensure your dishes are as germ-free as possible if you hand-wash but still want completely sanitary dishes: After washing the dishes, soak them for 10 to 15 seconds in hot water with 1 tablespoon (15 milliliters) of bleach added to sanitize the dishes and remove bacteria. Of course, if you're going to go take the extra step, using the dishwasher (if you have one) would serve the same purpose.

I was a squeamish child, and still don't especially like getting my hands dirty. As I was researching, I couldn't help but think of my grandmother -- herself an extraordinarily clean individual -- who would tell me, when I was being especially prissy. "You gotta eat a peck of dirt before you die," she'd say. Seems like she may have been right. Maybe if I had spent more time making mud pies and playing outside as a kid, I wouldn't suffer from hay fever every spring. Pass me a tissue... I'll be fine in another few weeks.

Allergies in Children
Is allergy immunotherapy for me?
When is tree allergy season?