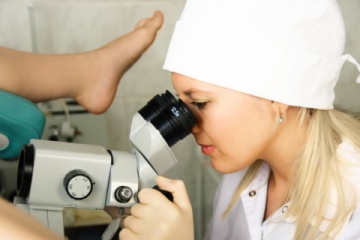 Hemera/Thinkstock
A colposcopy magnifies the view of the cervix for diagnosing abnormal cells.

In its earliest stages, cervical cancer usually causes no symptoms. Irregular bleeding, bleeding or pain during sex, or vaginal discharge may be symptoms of more advanced disease. These symptoms don't necessarily mean you have cancer, but they should always be discussed with a health care professional.

Despite the Pap test's 50-year record as a safe and highly accurate screening tool for cervical cancer and precancerous abnormalities of the cervix, many women do not have regular Pap tests. In fact, as many as 35 percent of women between the ages of 15 to 44 forgo this vital screening, according to the Planned Parenthood Federation and the U.S. Centers for Disease Control and Prevention (CDC). And, in fact, half of all newly diagnosed women with cervical cancer have never had a Pap test, and 10 percent haven't been screened within the past five years.

A Pap test is a simple procedure: After a speculum (the standard device used to examine the cervix) is placed in the vagina, cells are skimmed from the surface of the cervix with a cotton swab then smeared onto a glass slide. Another sample is taken from the T-zone (or the transition-zone, the area of transition between cervical cells and uterus cells) with a tiny wooden or plastic spatula, or a tin brush. Newer techniques called "liquid-based" Pap tests may provide a higher degree of accuracy and reliability.

The cervix is the narrow neck of the uterus that opens into the vagina. For women who have had total hysterectomies, in which the cervix is removed, cells are taken from the walls of the vagina. Women who have had a hysterectomy should continue to have a Pap test every two to three years until age 65 or 70 if they had a history of high grade squamous intraepithelial lesions before they had the hysterectomy. After age 70, they can discontinue screening after three consecutive normal Pap tests.

The slide is delivered to a laboratory where a cytotechnologist (a lab professional who reviews your Pap test slides) and, when necessary, a pathologist (a health care professional who examines bodily tissue samples) examines the sample for any abnormalities. Each smear contains roughly 50,000 to 300,000 cells.

Though not infallible, when performed properly the Pap smear detects a significant majority of cervical cancers — usually in the early stages when the likelihood of a cure is greatest, according to the American Society of Clinical Pathologists.

Because the Pap test can be associated with sampling and interpretation errors, research and development strategies are focused, to a large degree, on fine-tuning Pap test interpretation, visualization and tissue retrieval. The U.S. Food and Drug Administration has approved a number of devices to enhance the Pap test. Here's an overview of the new technology designed to improve accuracy of the Pap smear:

These tests were designed to more accurately interpret Pap smear slides and to reduce the incidence of false negative results.

Because some HPV subtypes can be a predictor of the presence or future development of cervical cancer, many medical professionals now also test for this disease as an adjunct to the Pap test. One test now available is:

To help improve the reliability of your Pap test, schedule your appointment two weeks after your last menstrual period and refrain from doing the following for at least 48 hours before the test:

An abnormal Pap test result does not mean you have cervical cancer. It indicates some degree of cellular change in the cells that cover the surface (lining or epithelium) of the cervix.

While the Pap test cannot reliably confirm a herpes infection, it can indicate infection with HPV.

In some cases, a Pap test may report that abnormal cells are present in a sample when, in fact, the cells in question are normal. This type of abnormal report is known as a false positive.

When a Pap test fails to detect an existing abnormality, the result is called a "false negative." Even under the best of conditions, there is always a small, but irreducible, false negative rate. Several factors may contribute to a false negative Pap test:

Usually, cervical cancer grows slowly. Precancerous changes may not become cancerous for months or years. Once they spread deeper into cervical tissue or to other tissues and organs, the cellular abnormalities are classified as cervical cancer, or invasive cervical cancer. Cervical cancer tends to occur in midlife; half of women diagnosed with cervical cancer are between the ages of 35 and 55, and it rarely occurs in women younger than 20.

A Pap test is a screening tool; other procedures are necessary to confirm Pap test abnormalities and diagnose conditions. All abnormal Pap tests should have some form of follow-up. This may include a "watch and wait" approach with retesting in several months. Or, depending on the degree of abnormality, your health care provider may order other tests, including:

If cancer of the cervix is diagnosed, more tests will be conducted to learn if cancer cells have spread to other parts of the body. These tests may include:

Your past Pap test results and personal health history will help your health care professional determine what type of follow up is appropriate.

For more information about cervical cancer, see the next page.