Why is it so difficult to find cancer cells? 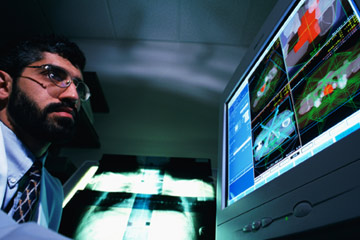 It's difficult to spot many cancers in their earliest stages.
David Joel/The Image Bank/Getty Images

Imagine you're standing in front of a sandbox. You've just been told that you'll receive a million dollars if you can find a certain piece of sand that's remarkable because it has a dot of black ink on it. How would you go about finding it? Do you even think you could?

Finding a single cancer cell in the human body is like looking for one grain of sand in a sandbox. You may think that it would be easier to find the cancer than the grain of sand; after all, hospitals are full of sophisticated diagnostic equipment that should help with the search. But there's no scan or test that can detect a cancer cell. The cell is simply too small, just one cell amidst the billions that make up the human body. Even small groups of cancerous cells are too small to see on test results, and sometimes larger groups of cells are hidden behind bodily organs so that they don't show up, either.

The undetected cancer cells have the opportunity to group together and form tumors. These tumors and cells also have a chance to spread throughout the body, a process known as metastasis. Large tumors and metastasized tumors are difficult to treat, which is why we hear so much about the importance of early detection. Unfortunately, it may be only after the cancer has grown or spread that symptoms start to occur. A tumor can grow so large that it affects organ function or causes bleeding or pain.

The difficulty of finding cancer cells not only presents delays in diagnosis, it can also create challenges to treatments. Cancer therapies such as radiation and chemotherapy are designed to target and kill cancerous cells in the midst of division. However, some cancerous cells lie dormant for periods of time, allowing them to survive several rounds of treatment. That's why cancer can come back years after a struggle with the disease.

What's the Difference Between a Neoplasm and a Tumor?
Do underwire bras give you cancer?
The Basics of Ovarian Cancer