Browse the article Will we ever cure cancer? 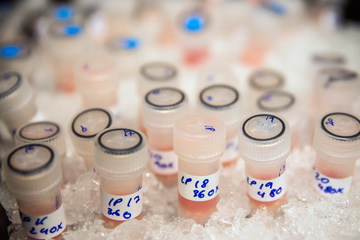 Vials containing biological samples are kept on ice before being analysed to see how they are affected by chemotherapy drugs at the Cancer Research UK Cambridge Institute.
Dan Kitwood/Getty Images/Cancer Research UK

We use the phrase "curing cancer" as shorthand for "doing the impossible." It doesn't inspire a lot of hope that a remedy for this grim disease is in our reach when beauty queens say their vision for the future is world peace and a cure for cancer. Is a cancer-free world really as elusive as a world where there are no wars, ever? Because it seems like we'd have a much better chance of curing cancer than getting billions of people to shake hands.

Welp, we have some not-great news. It's now looking more and more possible that a cure for cancer is just as likely as sitting down to a calm dinner with hostile ethnic groups or religious communities. And the reasons why aren't simply tied to lack of research funding or a dearth of ingenious theories. Instead, we might be dealing with the fact that cancer is simply so entrenched in the cells of living things that there's no way to alter them.

But let's back up a bit and talk about how cancer works. A cancer cell has mutations in its DNA that affect how the cell is regulated. That's why cancer cells can multiply fast and furiously: They don't have the fail-safe that other cells have. The normal process (known as apoptosis) occurs when a cell recognizes it has a problem — say, a virus or mutation. A normal cell will kill itself off, to prevent the "problem" from spreading. But cancer cells? Nope. Cancer cells just keep going and going.

So here's the problem that researchers found when it comes to investigating the causes of cancer: It's old. Really old. Scientists were studying hydra (little coral-like organisms) that are hundreds of millions years old, when they discovered that — just like humans and other vertebrates — the hydra could form tumors [source: Bosch et al.]

This implies some pretty heavy news: Cancer is deeply rooted in the evolution of cells. We might not be able to get rid of cancer because there's not a way to change the cell structure at such a fundamental level. Of course, this doesn't mean that we'll never be able to treat cancer so thoroughly that it can be completely eradicated in humans; that's a different story. But it's looking more likely that finding a "cure" to the root cause of cancer would involve finding an entirely new way for cells to work.