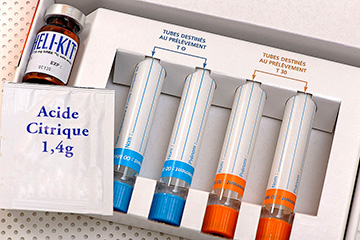 The implements for a screening test for colon cancer are displayed. Many cancer screening tests have high rates of false positives.
Media for Medical/UIG via Getty Images

You can't believe this is happening. In a proactive health move, you undergo a CA-125 test, which screens for ovarian cancer. The test result comes in positive. Shocked and reeling, you spend an agonizing week waiting for the results of a subsequent surgical procedure. When the results are in, they're negative. You don't have ovarian cancer after all. The first result was a false positive. You're elated, yes, but also angry. What's the use of having a screening test if it might not be accurate?

When it comes to your health, the more informed you are, the better. Medical tests can produce one of four results:

While many medical tests yield very accurate results, others do not. When undergoing such a screening, it's important to discuss with your physician how reliable the results will be. If your test yields a positive result for a certain condition, you will likely undergo a second, more accurate test. This isn't a big problem if the second test involves, say, a noninvasive blood draw. But sometimes the subsequent tests are surgical procedures, and/or are risky to perform. You don't want to undergo that if it isn't necessary.

Plus most, if not all, people are upset to learn they have a particular medical issue. It can be days or even weeks before the results of the second test come in, potentially leaving healthy people and their loved ones stressed, terrified and sleep-deprived for no reason. So how common are false positives?

A study published in 2009 in the Annals of Family Medicine found a high risk for false positive results in screening tests for prostate, lung, colorectal and ovarian cancers. And the risk went up with the number of tests administered. Results were compared after participants received four tests for various cancers versus 14:

These results don't mean screening tests are unreliable, or that you shouldn't have more than a certain number. Clearly, the tests do catch a lot of diseases, which translates to lives saved. But it's important to know the accuracy rate of any test you're considering, and the positives and negatives associated with any necessary follow-up tests so you can make an informed choice. 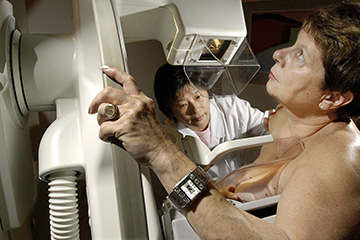 Unfortunately, it's difficult to eliminate false positive test results. For example, a mammogram may show abnormal cells in the breast ducts that could become cancerous, but in actuality they are not life-threatening and won't cause symptoms [source: National Cancer Institute]. Patients screening for ovarian cancer may be given a cancer antigen 125 blood test (CA-125). If a woman's CA-125 level is elevated, cancer is suspected and additional testing may result. The problem is, a lot of other conditions can cause an elevated CA-125 level, such as diverticulitis, pregnancy and even normal menstruation [source: Laughlin-Tommaso].

Of course, if one test seems to suggest you might have cancer, more have to be performed to be sure. And all of this drives up health care costs. Scientists studied 1,087 people participating in screening trials for ovarian, lung, prostate and colorectal cancers and published their findings in the December 2004 issue of Cancer Epidemiology, Biomarkers & Prevention. More than 40 percent of participants had at least one false positive test result; 83 percent of them subsequently received additional care because of this. The price tag? Female patients incurred an extra $1,024 in medical charges, while males hit $1,171 [source: Lefata]. Since this study was conducted 11 years ago, the fees would be much higher today. A 2015 study put the collective cost for false positive mammograms and breast cancer overdiagnoses at $4 billion a year.

Many would argue a far greater cost is in personal angst. A Danish study, published in a 2013 issue of the Annals of Family Medicine found women who received a false positive mammogram suffered from anxiety and depression up to three years after the faulty diagnosis — long after they knew they did not have breast cancer. Many women also had problems with sleeping and with their sex lives [source: Moisse].

So once again, no one is suggesting scrapping these tests, which save many lives. The take-away is to do your homework. Work closely with your medical professional to determine which tests are in your best interest, and how frequently you should have them done. And try not to become too alarmed if you receive a positive test result. It might be inaccurate.

As you've seen, false positives can show up in a variety of medical tests. Two of the more notable are mammograms, which screen for breast cancer, and colorectal cancer tests.

Mammograms have been in the news for some time now. A reputable way to uncover breast cancer, mammograms were long recommended for women starting at age 40, and earlier if there was a family history of the disease. But in 2009, the U.S. Preventive Services Task Force recommended women ages 50 to 74 should have mammograms every other year. And women under 50 and over 74 should only have mammograms after careful consultation with their physician. Others experts disagreed. The American Medical Association and American Cancer Society (ACS), for example, both reasserted their positions that women should have annual mammograms starting at age 40 [source: Walker]. In 2015, the ACS changed that recommendation to 45. (See sidebar.)

One of the reasons behind this kerfuffle is the prevalence of false positives in mammography. Although the test correctly identifies breast cancer 84 percent of the time, younger women, and those with dense breasts, are more likely to have a false positive mammography result. In fact, women who have regular mammograms between the ages of 40 and 50 have a 50 to 60 percent chance of receiving a false positive during this decade, which will result in additional testing, expense, inconvenience and worry [source: Susan G. Komen].

Women more at risk for a false positive test result previously have had breast biopsies, have a family history of breast cancer and take estrogen [source: National Cancer Institute]. Thus, when you begin mammogram testing, and the frequency with which you repeat it, should be carefully discussed with your family physician.

Colorectal cancer is the second-leading cancer-related death in the U.S. The American Cancer Society estimates there will be 132,700 new colorectal cancer diagnoses in 2015. The traditional means of screening for these cancers is through colonoscopy, which a 2014 study by University of Utah researchers showed catches 94 percent of colorectal cancers [source: The Scope]. But many people find the procedure and its preparation unpleasant, with only about 50 percent of people recommended for a colonoscopy actually undergoing the procedure [source: Lazarus]. This has led to the development of noninvasive screening tests that examine people's stools for cancer, not the colon itself. The problem is, these tests are less accurate.

One German study of six different stool tests (which look for trace amounts of blood) showed accuracy rates of 25 to 72 percent, and false positive rates of 3 to 30 percent. Cologuard, one of the newer colorectal cancer tests on the market, inspects the DNA in stool to check for colorectal cancer. While studies show the test finds 92 percent of the cancers that colonoscopies uncovered, and 42 percent of the polyps, it has a false positive rate of 13 percent. And the new Epi proColon test, which checks your poop for chemical changes to one gene, carries a false positive rate of 19 percent [source: Pollack].

In October 2015, the American Cancer Society came out with new guidelines for breast cancer screening. If you are at average risk for breast cancer, you should start yearly screenings at age 45, though you could begin as early as 40. After 55, you should have mammograms every other year, unless you want to keep on a yearly schedule. Breast exams are no longer necessary. 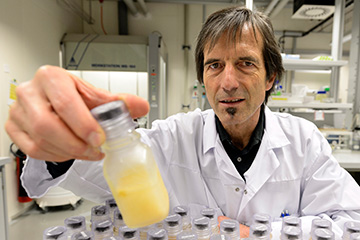 Martial Saugy, head of the Swiss Laboratory for Doping Analyses (LAD) of the Centre Hospitalier Universitaire Vaudois poses with an anti-doping sample of urine in his laboratory.
© LAURENT GILLIERON/Keystone/Corbis

There's no question it would be terrifying to be erroneously diagnosed with cancer, thanks to a false positive test. But cancer screenings aren't the only types of tests that can turn up false positives. Drug tests can as well. And falsely testing positive for drug use, especially illicit drug use, can be just as devastating as a false cancer diagnosis.

As with cancer screenings, false positive drug tests certainly aren't the norm; preliminary results from one study, released in 2010, showed 5 to 10 percent of drug tests resulted in false positive results [source: Laino]. Yet with some 150 million drug tests given in 2009 in the U.S. alone — to prospective employees, athletes, students and more — that equates to 7.5 to 15 million people winding up with false positives.

To protect yourself or a loved one, here are some things to know. Kids sometimes claim they falsely tested positive for marijuana because they were in a room where other kids were toking, not them. But standing in a cloud of marijuana smoke won't cause a false positive test. And cocaine is a drug that, for whatever reason, rarely shows up as a false positive or false negative [source: Laino]. The issue of false positives enters into the picture more if you ingest a legal medication or food that contains a trace amount of a drug, which then causes a false positive drug test. Here are a few of the more problematic sources [source: Borreli].

Author's Note: How False Positives Work (and What They Could Mean for Your Health)

I've never had a false positive test per se, although once a mammogram showed "suspicious" results, so I had to return for a more accurate test. Luckily, it was a noninvasive procedure. And the second test showed I was fine. But a year ago, a friend's mother was given a Cologuard test, and the result came back positive. My friend and her family went through several days of hell before a colonoscopy revealed she was actually fine. Her mother was very upset that her physician hadn't done more research on the various screening tests and their false positive rates, and was so traumatized by the experience that she quit seeing him.

I hope I never receive a false positive on a health screening test. But I'm going to continue to be tested. And if a test comes back positive, I'll remind myself not to panic unless a second test does, too.