Top 5 Questions to Ask Your Doctor about Alternative Heart Medicine

Question #5: Have any supplements for the heart been proven effective in clinical trials?

Clinical trials have been used to test the efficacy of Western medicine for years, but you may be surprised to find out that some alternative medicines are put to the same tests. Before we get into the nitty-gritty, we should talk about clinical trials themselves.

Anyone who watches the news on a regular basis can tell you that one week an alternative therapy is said to be good for you, and the next week a new study states it may be worse than cigarettes. These confusing and conflicting stories are an excellent example of how clinical trials can be flawed -- some of them test only a small group of people, some use different strengths of an herb, or researchers might just calculate results incorrectly. To avoid any confusion here, we'll focus on those alternative therapies that have had their fair share of reputable clinical trials. 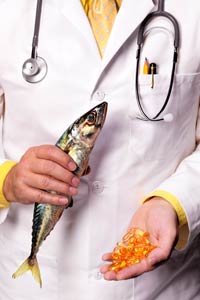 Omega-3s are one of those heart health no-brainers. Hundreds of studies investigating the effects of omega-3s on the heart have been published. The good news is that the vast majority of them had the same conclusion: They're good for you. Omega-3s are found in several different types of food, including nuts, oil and flaxseeds. While vegetarian sources like these are good, the most effective source of omega-3s is fatty fish, such as salmon and tuna. Fatty fish contain what science types like to call eicosapentaenoic acid and docosahexaenoic acid, most often referred to as EPA and DHA. Both of these fatty acids are needed in the body in order to produce eicosanoids, which are substances that help control functions in the body like inflammation. The heart-healthy benefits of EPA and DHA? They reduce inflammation in the arteries, lower triglyceride levels and can even help lower or regulate heart rate.

Keeping your heart in tip-top shape may be as easy as eating fish twice a week. Remember, the oilier the fish, the better. For folks with hearts that aren't so healthy, like those who have already suffered a heart attack, add to that supplements containing EPA and DHA [source: AHA Nutrition Committee]. This type of alternative therapy has been shown to reduce the risk of death due to cardiac causes by as much as 35 percent [source: Wang et al.]. Current recommendations are 1 gram per day for those with heart problems and up to 4 grams for those who need to lower their triglyceride levels [source: AHA Nutrition Committee].

Niacin is another friend of the heart because it's been shown to lower "bad" cholesterol (LDL) and increase "good" cholesterol (HDL). Why is this important? Increased levels of bad cholesterol can build up in your arteries, causing atherosclerosis. This plaque buildup can be a source of many heart problems, including high blood pressure and even a heart attack. Because niacin can reduce the amount of cholesterol in the arteries, it can help slow or, when paired with prescription cholesterol medications, even reverse atherosclerosis. As a result of these effects, one study showed that those patients taking niacin plus the cholesterol prescription medication simvastatin had a 90 percent decrease of cardiac events like heart attack, stroke and death than those on a placebo [source: Brown et al.]. If you're already on a prescription cholesterol medication, the amount of niacin you need should be decided by your doctor. For others, the current recommendation is between 1 to 18 milligrams a day and never more than 35 milligrams.

If you're not much of a pill popper, or just really hate fish, there are some alternative therapies that require only a sharp mind to achieve a healthy body. You'll learn more about these in our next section.