Top 5 Questions to Ask Your Doctor about Alternative Heart Medicine

You've probably heard this line of thought: If something's natural, it can't be bad for you. Not true. "All-natural" doesn't mean "all-safe," which makes sense to anyone who has walked through an all-natural patch of poison ivy. However, this reasoning means that many people omit herbal supplements or vitamins when listing their medications to their doctor. This can result in serious interactions with a patient's medications. 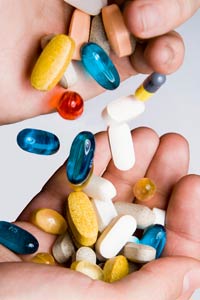 Scott Kleinman/Stone/Getty Images
A handful of vitamins might be too many vitamins.

A main issue in the safety of herbal and dietary supplements is that they aren't FDA regulated -- they don't go through the same safety standards that your prescription meds do. Makers of alternative medications don't have to prove that they're safe. Instead, the pills will only be taken off the market or the manufacturers given a warning if enough people get sick from them (and, of course, report their illness to the FDA). While the FDA is trying to set up more stringent standards for alternative medicines, right now adhering to standards is strictly voluntary.

Because of this lack of regulation, studies have shown that supplements may not contain consistent amounts of the active ingredient. For example, one brand of ginkgo biloba may contain 10 times more ginkgo biloba than another brand claiming to contain the same amount. Consistency can be the least of your worries when you consider that some tested supplements were found to have surprise ingredients not listed on the bottle, such as metal, actual prescription medications and even little organisms that managed to piggyback their way into the bottle. (A quick tip to avoid faulty supplements is to look for those approved by the United States Pharmacopoeia, NSF International or Consumerlab.)

The basic concept of "the more the better" can also lead to dangerous effects of alternative medicine. Organizations like The Food and Nutrition Board of the Institute of Medicine and the U.S. Department of Health and Human Services are the nice guys who wade through all the dense scientific research to determine the maximum daily amount that's safe, or as they like to call it, the upper tolerable intake level (UL). So just because niacin may be good for your cholesterol doesn't mean you should overdose on it. Daily amounts greater than those recommended by your doctor can damage your liver and may even cause liver failure.

We'll find out later how well supplements and other prescription medications play together. First, find out if mind-body medicine, with its lack of pills, is any safer than its supplemental counterparts.