If you ever have to bribe a baby, don't be stingy with the payola. That's the take-home from a new Yale study published in the journal Cognition. The larval humans can tell you're a slimeball, but they'll probably do business with you for a decent stack of crackers.

Yale psychologist Karen Wynn and psychology graduate student Arber Tasimi carried out a couple of experiments to gauge the "costly rejection of wrongdoers by infants and children." In the first, 5-year-olds and 8-year-olds had to accept either a single sticker from a "nice kid" or up to 16 stickers from a "mean kid." Most children didn't have any problem turning down the meany, as long as that kid was offering fewer than 16 awesome sparkle giraffes.

But then came the babies, creatures of surprising, albeit developing, cognitive abilities. Much of the problem-solving, price-counting and moral decision-making software they'll need as adults comes preloaded in the human headcheese. Unconcerned with stickers, the researchers had to bust out some quality snackage for the babes. We're talking graham crackers here. The good stuff. Green beans were also on the table.

Of course, the babies needed something more direct than good kid/bad kid, so the researchers subjected them to a mean-spirited hand puppet and a helpful one. As you can guess, both puppets offered snacks to the babies, but only the nasty one offered the sweet, brown skrilla in bulk.

As with the older kids, the babies were willing to pay the cost of NOT getting extra snacks in order to avoid that awful puppet — at least until the bribe stacked eight crackers high. Because, come on, that's a lot of sugar.

The study results show that infants engage in social biases long before they can actually employ language. Sure, they still have a price, but they're surprisingly willing to resist the dark side. Less encouraging, however, is the study finding that babies were more likely to support the nasty puppet's abuse of a dissimilar puppet — something that may amount to baby schadenfreude.

Twitch Serves Up Julia Child and Bob Ross — to Gamers 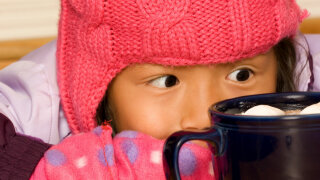