Can you predict the likelihood of a child becoming a victim of heart disease? 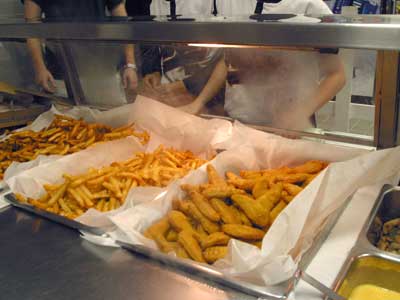 Childhood obesity has become a national epidemic in the Unites States. And it's no wonder when school cafeterias serve these tasty treats. Seemore fast food pictures.
Getty Images

Imagine a time when there wasn't a stack of bills piled up on your desk. A time when you had no boss to breathe down your neck, when you had no reason to wage a daily war with traffic. A time when there was no such thing as stress, and your health wasn't something you needed to worry about. No, this isn't some kind of alternate reality -- it's called childhood. Most adults would probably agree that children have it made. Sure, they depend on others for their safety and well-being, but the life of a child is pretty sweet. Play dates, bubble gum-flavored toothpaste and "Dora the Explorer" are the most important things on a child's to-do list.

The childhood years may be stress-free, but they're very important years. What happens in childhood can have a serious impact on what happens later in life. A child who shows aptitude for learning may be a better student in high school and college. A kid with good hand-eye coordination could end up a superior athlete. If you can carry a tune at three, you may star in a Broadway musical at 33. Unfortunately, bad things also play a part in a child's development -- there are a few telling signs in children that could indicate whether they'll suffer from heart disease later in life.

The most obvious factor is whether your child is obese. Childhood obesity has become an epidemic in the United States. Nearly one in every five children is overweight and researchers at the University of California have predicted a 16 percent rise in heart disease by the year 2035 if these children remain overweight in adulthood [source: NBC]. Another study in Denmark determined that a 13-year-old boy that's 25 pounds (11 kilograms) overweight is 33 percent more likely to develop heart disease as an adult [source: NBC].

The main reason that childhood obesity is a precursor to heart disease is that children who are overweight are more likely to become overweight adults [source: American Heart Association]. Carrying extra weight as an adult means you're likely to have higher blood pressure and cholesterol, both precursors to heart disease. Childhood obesity is an obvious way we can predict whether a child may have heart disease later. But there are some other factors that aren't so obvious -- and some you can't even control. 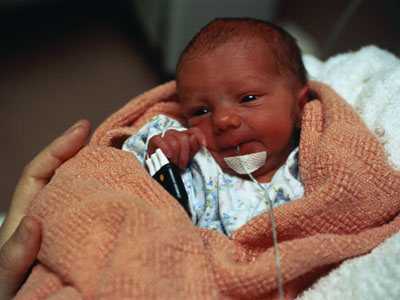 Recent research into heart disease has shown that something called C-reactive protein (CRP) plays a big part in developing cardiac issues as an adult. CRP is a protein found in the blood that rears its head whenever inflammation occurs. If you're injured or have an infection or a fever, your CRP levels will spike. But if your CRP levels are consistently high, it could mean your blood vessels are inflamed. Some doctors are beginning to think that high levels of CRP in the blood may have as much of a negative effect on your heart as high cholesterol. A 2002 study published in the New England Journal of Medicine shows that patients with the highest levels of CRP are more than twice as likely to have a heart attack as those with lower levels.

Here's where it gets interesting. Doctors are wondering whether high CRP levels in children could be a sign that heart disease is in their future. It's kind of a chicken or egg scenario because there hasn't been a lot of research conducted concerning children and CRP. One study of children in Taipei, Taiwan published in the International Journal of Obesity did find that there was a correlation between high CRP levels and the body mass index in both boys and girls.

Body mass index (BMI) is another key indicator in children that heart disease may be down the road. BMI is your body weight divided by the square of your height and multiplied by 732. In children, the earlier that kids have their lowest BMI followed by a normal increase in their body mass, the more likely they are to have heart trouble later in life. This is called BMI rebound, and it occurs between the ages of four and seven. So children that reach their lowest BMI at four years of age followed by their normal weight gain or "growth spurt" are more likely to have heart trouble than those who have their BMI low point at seven.

The last thing that can indicate future heart trouble is something you can't do anything about -- your genes. Doctors have said that heredity can affect your chances at having heart trouble for years, and now a specific gene has been targeted as a likely culprit. The bad gene is called LTC4S and if you're born with it, you're four times as likely to develop heart trouble later in life [source: The Washington Post].

Researchers have come a long way in helping to pinpoint some of the indicators of future heart disease. Doctors recommend having your child's BMI calculated beginning at the tender age of three. Keep your children's weight in check no matter what, but especially if you have a history of heart disease in your family. It's never too early to start looking at the future of your child's health.