How could someone with relatively healthy arteries be at risk for a heart attack? 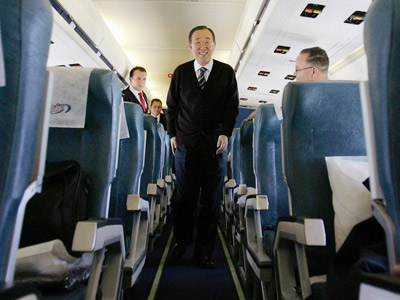 It's a good idea to move around on a plane, like United Nations Secretary General Ban Ki-Moon.
Don Emmert/AFP/Getty Images

Blood clots are pretty common. They're caused by a whole laundry list of conditions, including cancer, atherosclerosis, blood and circulation disorders and obesity. Smoking can help someone develop a blood clot, as can sitting motionless for very long periods of time, like during an international plane trip.

Deep vein thrombosis, or DVT, is a type of blood clot that forms in the deep veins of the leg or groin, and it occurs commonly on flights lasting longer than eight hours. Hundreds of thousands of people develop this clot, often termed economy class syndrome, as a result of sitting still too long, and many of them have perfectly healthy arteries [source: Ohio]. Most people develop tiny clots that don't produce any symptoms and dissolve slowly, causing no problems at all. Some people, though, end up with a clot that can cause death.

Clots develop when clotting agents in the blood, called platelets, stick together. Platelets are the particles in your blood that prevent you from bleeding to death from a paper cut; they stick together to stop the bleeding. When a clot develops in a place like a vessel of the heart or one leading to the brain, though, it can stop blood flow and cut off oxygen, possibly leading to a stroke or heart attack. When it ends up in the heart, it's called a pulmonary embolism. You don't need to have heart-disease risk factors for it to happen, although that is the most common cause. On a plane, for instance, a blood clot can develop when you don't move around enough and blood pools in your legs. Blood clots can also result from the use of hormonal birth control, especially if the woman also smokes cigarettes.

In the scenario of a DVT, a heart attack isn't a sure thing. People who receive treatment -- usually blood thinners -- within an hour of developing a clot will almost always be just fine. The problem is that many people don't know the signs - they think the pain in their leg or groin is a cramp from sitting on the plane so long. Untreated, a DVT can be disastrous because it may disconnect from the leg vein, leave the point of origin and end up in the bloodstream. If this happens, it can travel all the way to the heart and cause a heart blockage, and possibly a heart attack. This is what happened to reporter David Bloom in 2003 when he spent days sitting in a cramped tank covering the Iraq War. He was 39 years old and didn't have heart disease. A clot developed in his leg and traveled to his heart, and he died of a heart attack.

The best way to avoid a heart attack from a pulmonary embolism is to be aware of the risks. When you take a long flight, make sure to walk the aisles of the plane every now and then to keep the blood moving efficiently through your legs. If you take birth control pills, call your doctor immediately if you feel pain or pressure in your leg or groin. And by all means, don't smoke.

While the causes of blood clots are well-known, another heart problem that can strike someone with a previously healthy heart is harder to explain.