Browse the article What are the symptoms of heart failure? 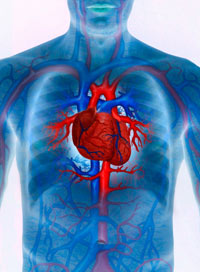 Heart failure is a condition that develops gradually as a weakening heart loses its ability to pump enough blood through the body to take care of the needs of the body’s other organs. In most cases, loss of the ability to pump effectively is a symptom of an underlying problem, such as heart muscle injury due to high blood pressure, a heart attack or coronary heart disease. Coronary heart disease is caused by narrowing of the arteries that supply blood to the heart. (If the blood supply is cut off, the result is a heart attack.)

The term "heart failure" might suggest a complete stoppage of the heart's activity. But the heart doesn't suddenly stop beating. Instead, heart failure most often develops slowly, often over years, as the heart's pumping ability gradually declines and the heart consequently works less efficiently. Many people with heart failure don't realize they even have the condition until years after their heart has begun to weaken. That's because symptoms generally don't show up until the condition is more advanced.

On the next page we'll learn about the symptoms of heart failure in more detail.

Symptoms of Heart Failure in a Nutshell

The Main Symptoms of Heart Failure

Although no one symptom is specific to heart failure, a number of symptoms are linked to the condition. A condition called fluid overload, in which excess fluid accumulates in the body's tissues, is one of the major symptoms of heart failure. As the heart's pumping weakens, less blood is pumped out to the body and forced back to the heart. As blood backs up in the blood vessels, the increased pressure forces fluid out into various body tissues, where it accumulates.

One of the major symptoms of fluid overload is shortness of breath (dyspnea). This occurs when excess fluid accumulates in the small spaces in the lungs (pulmonary edema), interfering with the lungs' ability to replenish the blood supply with oxygen. Breathing difficulty may occur either during exercise or at rest. It may even be more pronounced when a person lies down. This condition, called orthopnea, can make sleeping difficult and can often be relieved by sleeping with extra pillows. Occasionally, fluid overload in the lungs can cause a sudden, terrifying inability to breathe while a person is sleeping, causing him or her to suddenly awaken, gasping for breath. This condition is called paroxysmal nocturnal dyspnea. Persistent coughing or wheezing is another common symptom of fluid overload in the lungs due to heart failure.

Fluid overload may also cause swelling (edema) of the feet, ankles, legs, and occasionally, the abdomen. A person with edema may notice that his or her shoes feel tight, that rings fit more snugly or that belts need to be loosened. Excess fluid retained by the body may cause weight gain.

Another common symptom of heart failure is tiring quickly with any physical activity. All of the body's organs, including muscles and lungs, have less access to oxygen and nutrients as the heart pumps less effectively and blood flow slows. As a consequence, the organs are less able to perform their functions. Sometimes even simple actions, like getting dressed or walking across a room, can become a challenge for a person with heart failure.

A lack of appetite or nausea may be a sign that the digestive system is having difficulty because it's not getting enough blood. Memory loss or confusion can result from an imbalance in certain chemicals, like sodium. An increased heart rate, which may make it feel like the heart is racing, can result from the heart attempting to compensate for the decreasing effectiveness of its beating.

To learn more about heart failure, take a gander at the links on the next page.

How the Heart Compensates for Early-stage Heart Failure

Heart failure often develops slowly, and the heart has the capacity to slowly undergo changes that compensate for its lessening ability to pump efficiency. The heart tries to make up for its progressive decline by undergoing these changes:

The heart undergoes adaptations that are able to put off, sometimes for years, the appearance of symptoms. But as the disease progresses, even these changes cannot prevent the eventual manifestation of heart failure.