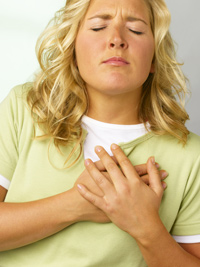 It sure looks like she's having a heart attack. But what's going on here besides chest pain? See more heart health pictures.
Peter Dazeley/Getty Images

It's Monday morning. The traffic is thick. An overturned tractor-trailer is sprawled across four lanes of the h­ighway, and you're late for your annual performance review with your boss. Great.

As the seconds tick by, the tightness in your chest grows, along with the line of cars getting off at your exit. You jam the window down and gulp in some fresh air, trying to breathe deeply. You feel anxious, light-headed. Is there a giant panda sitting on your chest?

You are having a heart attack.

Let's pause right there. Instead of lecturing you about heart health in this article, we're going to take you inside the body and tell you what happens during a heart attack.

What's happening inside your heart right now isn't so different from the craziness on the roads. You know that overturned tractor-trailer? You have one of your own parked in your coronary arteries, the same highways that wrap around your heart like a crown and supply blood to the different parts of the heart muscle. Only instead of a tractor-trailer, it's a piece of plaque, a buildup of cholesterol and fatty material, lodged inside your coronary artery.

A narrow lane of traffic (or blood) may have been squeezing by this obstruction for years, but now a road crew in the form of platelets has arrived to fix a pothole on the plaque. With these disk-shaped bodies in the way trying to clot, no blood can move past at all. Blood is backing up and peeling out in all directions trying to find alternate routes, and heart muscle may soon be dying on the other side of the accident scene. The longer it takes you to get to the hospital and get treatment, the more damage will occur.

What a mess, huh? Is the rest of your body helping out? Or are all those organs and tissues acting like morbid onlookers at an accident scene?

Blocked Arteries and the Five-Minute Process That Kills You 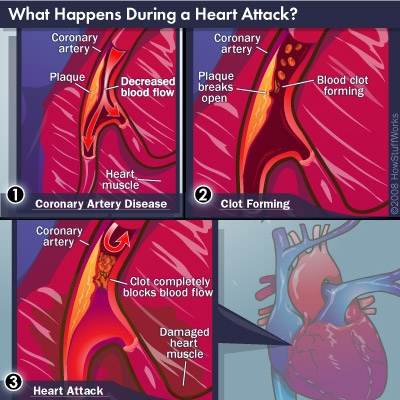 Like all muscles and tissues, your heart needs oxygen to live. A few minutes without that precious supply of bloodborne oxygen and your heart tissue begins to die. But here's the surprising part: Often it's not the lifetime of worsening traffic congestion in your arteries stemming from coronary heart disease (or atherosclerosis) that kills you, although CHD is an alarming condition in its own right. It's that five-minute pothole patch that does you in.

Here's how it works. Let's say you nick your arm. Platelets in your bloodstream rush to the cut, clump together and harden. Soon, a bumpy scab appears from the platelets, plasma and fibrin that worked to keep you from bleeding to death (or spotting on your shirtsleeve).

The same process often hap­pens in­side the body during a heart attack. A piece of plaque, maybe 40 years in the making, gets knocked around by materials whizzing by in the bloodstream and ruptures. Fast-acting platelets arrive at the scene, pile on and form a clot. In minutes, it does what a lifetime of plaque and cholesterol didn't: It blocks your artery, starving heart muscle of oxygen and causing tissue death. This is your heart attack.

The dire condition of your heart doesn't go unnoticed by the rest of your body. Earning its name, the nervous system freaks out when it realizes what's going on. It kicks the rest of your body into "fight or flight" mode. You begin sweating, your skin feels clammy and your heart rate increases. Your nervous system makes you feel nauseated and weak. You're either having a heart attack or listening to the morning's traffic report.

These side effects don't seem very helpful, but they may save your sweaty life. Researchers have found that heart attack victims who sweat profusely are more likely to seek immediate treatment, and thus have a higher rate of survival than people who simply "glow" during their heart attacks [source: WebMD].

In addition to backing up traffic in the blocked artery, your heart attack also is affecting nearby roads, leading you to feel pain in your jaw, arm or elsewhere. Why is this? The sensation of pain travels from the source (your heart) to your spinal cord. When these pain signals reach the spinal cord, many of them merge onto the same nerve pathway. So, even though your jaw is perfectly fine, your brain has interpreted part of the heart's pain signal to be a call for help from the jaw. This is called referred pain.

Your heart attack backs up traffic in your lungs as well. Your ticker is too busy trying to save its own life to worry about effectively pumping blood to the rest of the body. Some of that fluid stagnates in your lungs, leaving you nearly breathless.

While you're sweating, rubbing your aching arm and falling apart, your heart cells are gasping for oxygen. Receiving none, they die, and they're not coming back. If your heart has stopped beating entirely, your brain cells will die off in about three to seven minutes. Oddly, bone­ and skin cells can survive for several days [source: ­Macn­air]. Without medical assistance, you'll eventually die from heart failure (not pumping enough blood to the rest of the body) or ventricular fibrillation (a deadly arrhythmia that causes your heart to stop beating).

If you made it to the hospital in time and your heart is still functioning, congratulations. Your heart begins healing almost immediately. The dead tissue, though, becomes scar tissue, and that part of the heart will never work as well again. From now on, traffic will always be slower, but it beats crawling inside the Great Orange Construction Barrel in the Sky.

­To learn more about avoiding that fate, keep reading -- there are lots more heart articles on the next page.