The Common Cold: An Inside Look

Browse the article The Common Cold: An Inside Look 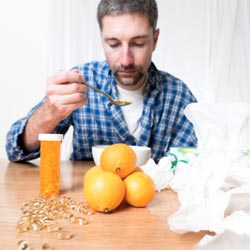 Poor guy -- his first sign of his cold probably was a runny nose.
©iStockphoto.com/Stacey Newman

Cold and flu symptoms are never the same twice, and that can make it hard to defend against the common cold. One year you have a stuffy head cold; the next you're coughing your head off because a virus is infecting different parts of your respiratory system. Figuring out your cold and flu treatment can be very challenging - especially when you're not sure if your symptoms are for a simple cold or the flu.

In an effort to make your cold treatment choice a little easier, below is a list of common symptoms and doctor-recommended treatments for each. Remember: always consult your physician when taking over-the-counter medications or herbal remedies to ensure your safety and good health.

Your Symptoms Up Close

Basically there are two kinds of coughs: productive and non-productive. A productive cough is one that allows the mucus accumulated in your air passages, to come forth. This mucus or phlegm is produced as white blood cells and attempt to rid you of infection.

The quicker you get the mucus out or your system, the quicker you'll be feeling better. If you need help getting rid of the excess mucus, an expectorant may be in order. Expectorants help loosen secretions and mucus in the airway, thus making it easier for you to cough the mucus out.

A non-productive cough is dry and is usually caused by mucus dripping from your nasal passages to your throat. This type of cough can be treated with what are known as suppressants. Cough suppressants block your cough reflex so that you don't cough as much when your throat is irritated. Most cough suppressants block the cough reflex in the part of the brain that regulates automatic cough. You may also find relief in sucking on a cough drop or lozenge. The objective is to lull the brain's cough center to be less responsive to signals of irritation.

Although fever is more common in bacterial infections rather than viral infections such as with colds, it can occur with other cold symptoms.

Children are much more prone to getting a high fever during a cold than adults. In either case, bringing the temperature down is one key to relief.

None of the reported cases of inhalation anthrax began with a runny nose. So you need not immediately suspect anthrax infection. However, if in doubt, consult your healthcare provider early as inhalation anthrax can become dangerously severe within hours.

Like the productive cough, the runny nose has its advantages in getting rid of the virus causing the cold. Therefore you may want to allow it to run its course and take steps to comfort yourself through it.

One such way is to take aspirin or acetaminophen and put a warm compress on you forehead. Children should be given non-aspirin containing fever reducer such as ibuprofen or acetaminophen so as to avoid a serious, but rare complication known as Reye's syndrome. Be aware that a constant or periodic runny nose that is seasonal in nature could be a sign of an allergy and you may want to consult your physician.

While the common cold may cause a productive cough, the cough that often comes with influenza is non-productive.

A stuffy nose is no picnic. It usually affects your breathing and is generally uncomfortable to say the least. When stuffy noses that accompany colds occur, the blood vessels expand, the mucus membranes become congested (full of excess blood), and the nose becomes stuffy, or blocked.

Once the cold virus gets into the nose, histamine is released and that increases the blood flow to the nose. Then the nasal tissues begin to swell up and that stimulates the nasal membranes to produce excessive amounts of mucus.

You can treat a stuffy nose with decongestants, nose drops or sprays.

Sneezing is caused by the irritation of the soft lining of the nose or throat. When you sneeze you inhale air, then the the larynx closes so that air pressure in the lungs is increased, then suddenly the larynx reopens and sends a rush of air out through your nose and mouth.

Treating the sneeze can be counterproductive since it is the body's attempt to clear away offending irritants associated with your cold. The best way to prevent sneezing is to remove the irritants, so gentle nose blowing helps. For sneezing associated with allergies, antihistamines may do the trick, but they have no place in the treatment of colds.

In a typical cold the mucus will be clear and gets thicker and turns yellow as your symptoms improve. But if the color gets very dark or greenish and the mucus very thick, it may be a sign of a bacterial infection. In that case, you should consult your physician.

Sneezing is an excellent way to spread your cold virus to others, so when you sneeze, cover your mouth with a facial tissue, then throw it away and thoroughly wash your hands with warm, soapy water.

A sore throat due to inflammation caused by the cold virus itself and is a common symptom of a cold. You can relieve the symptoms of a simple sore throat with over-the-counter throat lozenges or sprays with a local anesthetic, salt water gargles four times per day (one teaspoon salt in 8 oz. warm water), cough drops or hard candy.

You may also want to use a vaporizer to increase the moisture in your home since a dry throat can cause irritation and pain.

If signs of a sore throat persist for more than a few days or are severe with marked difficulty in swallowing, high fever or vomiting, then your doctor should be consulted.

Don't try to hold back a sneeze. As is the case when you blow your nose too hard, the added pressure could force the mucus into the sinuses and ears, causing a bacterial infection.