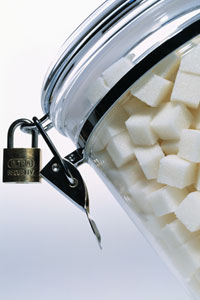 Diabetes is an increasingly common disease, affecting about 8 percent of Americans -- and nearly a quarter of all Americans older than age 60 [source: CBS]. It's so common that it has made its way into regional dialects; it's known variously as "sugar," "the sugar" and "sugar diabetes" [source: Patrick].

As those nicknames suggest, diabetes affects the body's ability to process dietary sugar. If untreated, it can lead to numerous complications, including blindness, nerve damage, heart and circulation problems, gangrene and amputation of the feet, kidney failure and early death. The good news is that, in many cases, treatment, which usually involves a combination of diet and medication, can greatly reduce the risk of these complications.

There are two types of diabetes. Type I (formerly known as juvenile diabetes) is sometimes called insulin-dependent diabetes. That's because Type I patients have to take insulin, either via regular injections or via an insulin pump. Insulin is the hormone produced by the pancreas that helps the body process sugar. Type I patients don't make enough insulin on their own.

Type II diabetes (formerly known as adult-onset diabetes) is almost always a complication of being overweight. Although its causes and treatment are different from those of Type I, its symptoms and complications are highly similar. In type II diabetes, the body stops being able to use its own insulin.

Type II patients may take insulin. They must also change their eating habits. The goal of a diabetic diet is twofold: to get the patient to a healthy weight (thereby reducing the physical causes of diabetes as well as many of its complications) and to regulate blood sugar by regulating the intake of the foods that produce it.

In this article, we'll look more closely at diabetic diets -- what goes into making a diabetic eating plan, which foods you'll need to be careful about, and some tips for sticking to a diabetic diet in our decidedly unhealthful world.

Like most diet plans, diabetic diets rely on caloric restriction. The number of daily calories varies based on several factors, including goal weight, activity level, type of diabetes and gender.

A Type I diet is based on body weight: roughly 16 calories per pound of body weight (35 cal/kilogram) [source: Norman]. So someone who weighs 150 pounds (68 kg) would be on a diet of roughly 2,400 calories per day.

For someone with Type II diabetes, the daily calorie load is typically lower. The issue isn't just sugar -- it's the excess calories that are contributing to being overweight. An endocrinologist will determine a goal weight based on the patient's height. The calorie load will then be determined based on the specific ideal body weight, probably somewhere in the range of 1,500 to 1,800 calories. Here's a rough way to calculate the goal weight:

Once you know how many calories you're consuming, there's the question of what those calories come from. For the moment, forget what you know about the food pyramid. For our purposes, what matters is any food that the body converts to glucose, or blood sugar. To a diabetic, all those foods are carbohydrates. They include sugar, obviously, but also fruit, bread, soda, milk and yogurt.

Carbohydrates should make up 40 to 60 percent of daily calories. The remainder should come from meats and fats. There are four calories to each gram of carbohydrates, so on the Type I diet above, the patient would consume 240 to 360 grams of carbohydrates (representing 960 to 1,440 calories) per day [source: Norman].

To simplify these calculations, many diabetics count exchanges, or groups of 15 grams. You might have seen this terminology on a nutrition label: "Each serving contains 2 carbohydrate exchanges." That means the food in question has about 30 grams of carbs. The Type I diet above permits 16 to 24 exchanges in a day.

But what can you actually eat? On the next page, we'll find out.

People with diabetes need to avoid sugar loading -- consuming a lot of carbohydrates at once -- because it can cause spikes in blood sugar. That means spreading out the consumption of carbohydrates over the course of the day, and knowing before you start a meal if you'll be having dessert.

On a diabetic diet, you can still eat a wide variety of foods, but you'll have to keep a watchful eye on portions. You'll need to have a scale and measuring cups in your kitchen to make sure serving sizes are accurate.

Remember that every food, not just carbohydrates, has some impact on your blood sugar. Low-carb, high-fiber foods -- whole grains and vegetables -- are great. You also have so-called free foods, such as bouillon, tea or sugar-free candy, whose caloric load and impact on blood sugar are so low as to be negligible. Free foods don't count as exchanges.

Of course, the opposite of free food is junk food. You'll have to be careful about certain snacks. When your calories are restricted, your first consideration must be how many nutrients you get from a food. Watch out for empty calories -- high-fat, high-carb, low-nutrient foods such as chips.

Don't forget that a diet isn't limited to things you chew. Soda and juices are often high in sugar. Some kinds of alcohol contain carbohydrates, and all of them contain calories. You'll need to be careful about your alcohol intake anyway -- diabetic bodies tend to be sensitive to alcohol. Limit alcohol to no more than two drinks a day for men, one a day for women [source: Norman].

It's all very well to plan a diet, but sticking to it is another matter altogether. On the next page, we'll look at some tips for making a diabetic diet successful.

Taking Your Diabetic Diet to a Restaurant

As you develop an eye for serving sizes, you'll realize just how big restaurant portions are. Ask for a doggie bag, split the meal with a friend or order an appetizer portion. Also, keep an eye out for extras: Dressings, garnishes, sauces and sides can drive up your caloric intake. Don't be afraid to order the side salad with low-cal dressing.

What happens when someone brings cupcakes to the office for your birthday? What if you'd like to grab a beer with friends?

It's true that total spontaneity may be a casualty of your eating plan. But let's face it, almost everyone -- diabetic or not - has to do some dietary planning. No one stays healthy on a daily regimen of cupcakes and beer. If you use your exchanges judiciously, you can have an occasional treat and still keep your blood sugar in check. Keep a food diary so that you know what you've already eaten, and understand the impact of every splurge.

Eating is an important social activity for many of us. Let your friends know about your eating plan, so that social activities can include healthful foods. Most friends will support your efforts -- they don't want to lose you. Similarly, if one person in the family develops diabetes, let that be a sign to everyone to adopt more healthful eating habits.

One strategy for avoiding temptation is to fill up on low-carb vegetables, water and free foods. For example, a serving of spinach has a mere 20 calories, and it's packed with nutrients and fiber. High-fiber foods help you feel full for longer.

Remember to eat often throughout the day. Long stretches of not eating can lead to crashes in blood sugar. They also -- big surprise -- make you hungry. When you feel as though your stomach's about to cave in, it's much harder to say no to a sugar-laden snack.

Keep desirable foods, such as fresh fruit and vegetables, visible. We tend to eat based on visual cues, so have a fruit bowl in the kitchen, and use clear plastic containers in the fridge.

Go for cuisines that don't require a lot of fancy chemical tinkering to taste good. For example, Asian and Mediterranean diets are naturally flavorful, high in vegetables and low in sugar.

Caloric restriction may feel like a giant, painful imposition -- especially if unrestricted eating has been your norm, but a diabetic diet is your first step toward regaining control of your health and your body.

Exercise is an important part of weight loss. If you've been completely sedentary, any physical activity may feel dismayingly difficult. Don't give up. Work to increase your activity in tiny increments -- for example, walking for just five minutes longer. You'll be amazed at how soon those increments turn into a serious fitness regimen -- and at how soon you feel the difference.