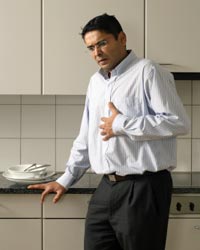 For sufferers of gastroesophageal reflux disease (GERD), heartburn is a constant tormentor brought about by chronic regurgitation of stomach acid and other digestive liquids back up into the esophagus, the long tube that connects your throat to your stomach.

When the LES malfunctions, it does so in one of two ways: It either randomly decides to relax (which is the cause of "normal" heartburn), or the LES tries to close but it doesn't completely shut. When either occurs, stomach acid, bile and recently swallowed food or beverages can return through the open valve, moving up the esophagus and even back into the mouth.

Frequent regurgitation of acid can lead to serious conditions such as esophagitis -- inflammation and damage to the esophageal lining -- or esophageal stricture, a narrowing of the esophagus caused by a near-constant state of repair as the esophagus attempts to heal from the effects of esophagitis.

Fortunately, there are certain lifestyle changes you can make to relieve the symptoms of GERD. Better yet, you're about to learn about five of these lifestyle changes, starting with your attention span. 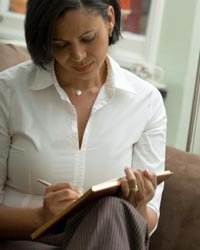 The first step to fighting GERD is finding out what triggers yours.
© iStockphoto.com/digitalskillet

If you suffer from GERD, one of the first changes you can make to your lifestyle is to start paying attention to it. While most of us go through our lives oblivious to why we feel the way we do at different points in the day, GERD sufferers can't afford this luxury of blissful ignorance.

Take notes as if you're a detective working on a case. Write down what's going when you experience heartburn. Is it daytime or nighttime? Did it happen shortly after you consumed alcohol or smoked a cigarette? Does heartburn strike after meals? If so, what kind?

As you keep notes, you may begin to notice patterns of behaviors that strongly contribute to heartburn. To catch the primary culprit, eliminate foods and activities that are known to contribute to GERD and then, after several days have passed, bring those foods and activities back into your routine one by one, while paying close attention to your behaviors and symptoms. When the burn returns, you've nabbed the perp.

Next up: the all-around holistic fix-it.

One of the best ways to get control over GERD, especially if you experience heartburn while you sleep, is to sleep with your upper body elevated. You don't have to sleep standing straight up on your feet, but you also don't want to just prop up your head -- it won't help. The esophagus itself (which runs from the back of the throat down to just below your sternum) needs to be slanted by keeping your collarbones higher than your hipbones.

One of your allies in your struggle with GERD is gravity, which makes it harder for stomach acid to work its way upward. Other allies include saliva (which essentially washes regurgitated liquid back down the esophagus) and the act of swallowing. But when you sleep, you're all on your own against the forces of GERD -- no gravity (your esophagus is horizontal), no saliva production and no swallowing in your sleep.

To help keep stomach acid out of your esophagus at night, you can do one of several things to elevate your upper body. You can use pillows or a foam wedge to prop yourself up, or you can use wooden blocks or other objects to lift the upper part of the bed so that the entire bed rests at an angle. 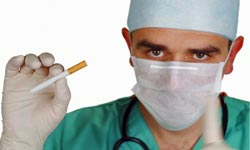 While the symptoms of GERD can sometimes make an otherwise normal day seem unbearable, there are some good lifestyle choices available that can make a big difference in your quality of life.

If you have GERD, try cutting out alcohol to see if it makes a difference. Red wine in particular seems to exacerbate GERD-related heartburn. Carbonated drinks and caffeine can also prompt reflux, so you may want to switch to water and then introduce different beverages to your system over time to see what works for you.

Nicotine products (even nicotine gum) cause the LES to relax, allowing reflux to happen. Also, smoking further agitates an esophagus that is already raw from excessive contact with stomach acid.

Losing weight may be the single best thing you can do to improve your life if you are dealing with GERD and are also overweight. A smaller belly equals less pressure on your stomach at all times, meaning less reflux. There are countless other positive benefits you'll also receive through weight loss, such as lowered cholesterol and blood pressure.

Finally, if you take any kind of medication for non-GERD conditions, have your doctor look it over to see if it might affect your reflux in any way.

2: Remember You're Not at an All-you-can-eat Buffet

When the stomach is full and expanded, it makes it that much harder for a faulty LES valve to operate properly. This is one of the main reasons reflux occurs most often after a meal. (This is also why reflux frequently occurs during a pregnancy.)

For this reason, GERD sufferers should skip the gut-busting feasts and alter their eating habits to feature smaller meals (even if you have to eat four to five light meals a day, instead of three square belt-looseners).

Wearing looser clothes can also help relieve some of the pressure on your stomach. And silly as it may sound, try not to bend over after eating, as this will increase gastric pressure and possibly force stomach acid up into your esophagus.

1: Be a Pickier Eater 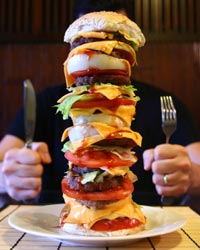 This is what we call heartburn/a heart attack on a plate.
© iStockphoto.com/Stormcab

If you want to better control GERD, you need to get better control of your diet. The foods you eat -- and when you eat them -- play a big role in the frequency and intensity of your GERD-related heartburn.

While some foods affect certain GERD sufferers more than others, there are some dietary rules of thumb that may offer relief.

When it comes to fried foods like French fries or onion rings, it's best for GERD sufferers (and most everyone else, really) to just leave them alone. Peppermint can actually prompt the LES to relax, so it's best to avoid it if you notice that consuming it precedes bouts of heartburn. The same goes for chocolate and carbonated beverages. However, it should be noted that cutting these items from your diet may not significantly improve your reflux -- so if they don't bother you, go ahead and keep munching (in moderation, of course) [source: Bergeron].

High-fat foods seem to prolong the amount of time it takes for the stomach to empty, so switching to a low-fat diet may help you curb your heartburn. Stay away from citrus products, tomato juice and other acidic foods.

Finally, eat your least meal of the day several hours before you go to bed, so that it's fully digested by the time you lie down.

Want more on fighting acid reflux and GERD? Try the links to HowStuffWorks articles on the next page.

When should I call my doctor about GERD?

You should call your doctors when your GERD symptoms worsen. Get more facts about GERD from Discovery Health.