Are stomach ulcers caused by stress? 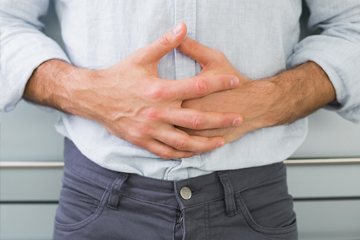 Stress does not cause stomach ulcers! Do you feel any less stressed knowing that?
Wavebreakmedia Ltd/ThinkStock

Harold, a 55-year-old used car salesman, pushes aside stacks of coffee-stained papers on his overcrowded desk, hunches over a dusty calculator and flings the end of his polyester tie over one shoulder, making the salsa stain from lunch a distant memory. He pecks a few numbers, hits clear and does it again. His commission just isn't adding up to the number he needs. Tossing the machine aside, he reaches for a half-empty container of antacids, flips the lid and empties a handful into his mouth. As he chews the chalky discs, one hand absently rubs the belly keeping his belt in a perpetual eclipse. All this stress is making his ulcer flare.

Or is it? Harold first visited his doctor about stomach pain in the late 1970s. He was given a battery of tests and, ultimately, a diagnosis. Harold had a peptic ulcer, a condition that prompted some vague advice. "Control your stress, cut back on coffee and don't eat spicy foods," said his doctor.

Unfortunately, even if Harold had followed his doctor's orders, it probably wouldn't have helped. Turns out, peptic ulcers -- open sores that develop in the lining of the esophagus, stomach and upper portion of the small intestine -- aren't mitigated by stress management. And they aren't caused by it, either.

It wasn't until the early 1980s that researchers realized the bacterium Helicobacter pylori was the primary cause of peptic ulcers. It isn't clear how this bacterium spread, but there are theories that it is passed through close contact with an infected person, or through contaminated food and water. Once a person is infected, H. pylori lives in the mucous layer that covers the tissues lining the stomach and small intestine. And, for reasons researchers don't yet understand, H. pylori causes ulcers in some people and not others [source: Stöppler].

There are less common causes for ulcers, too. They include the use of over-the-counter and prescription pain relievers and medications used to treat osteoporosis, as well as potassium supplements.

Whatever the cause, peptic ulcers can be an ongoing source of pain, especially when a fresh wave of stomach acid hits them. While OTC antacids can offer temporary relief, a two-week course of antibiotics designed to kill H. pylori usually allows the sores to heal. Doctors may prescribe supportive medications to block or neutralize acid production as well as promote healing [source: Mayo Clinic].

Can an ulcer kill you?
Herbal Remedies for Ulcers
Does spicy food really cause ulcers?