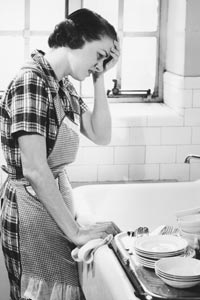 Fatigue causing your headaches? Or is it poor posture?
George Marks/Retrofile RF/Getty Images

The experience of a tension headache, described on the previous page, will be suffered by an estimated 90 percent of Americans during their lifetime. These headaches often feel like pressure is being applied uniformly around the head, or as if the head is being steadily squeezed in a vise. Lasting anywhere from 4 to 72 hours, tension headaches are the most common, but fortunately the least severe, of all headaches types.

Around 30 million Americans experience the more intense migraine headaches, which can last for days and be painful to the point of preventing the victim from functioning. Migraine headaches have many unique symptoms that set them apart from tension headaches. For example, migraines are often described as a throbbing pain that begins on one side of the head and then spreads out. Migraines can also come with an increased sensitivity to light and worsen with physical exertion. As a result, migraine sufferers often choose to lie down in the dark in an attempt to reduce their pain.

Another characteristic of a migraine is that it's often accompanied by gastrointestinal disturbances, including abdominal pains. This symptom results from stimulation of the sympathetic nervous system, which is normally activated in response to stress or pain. The digestive system disturbances caused by migraines slow the uptake of ingested medications and reduces their effectiveness.

Migraines are also unique because they're often preceded by warning signs, which might include fatigue, depression, euphoria or even cravings for certain types of foods. For about 20 percent of migraine victims, the onset of an attack is signaled by an aura, which can manifest as an abnormal disturbance to any one of the five senses. Visual auras are by far the most common, and often take the form of wavy lines or flashing lights. (For the full story on migraines, check out How Migraines Work.)

Headaches are one of the most commonly reported medical problems. According to the National Pain Foundation, headaches cause over 160 million lost work days annually, and around $30 billion in medical expenses.

10 Tips for How to Relieve Sinus Pressure