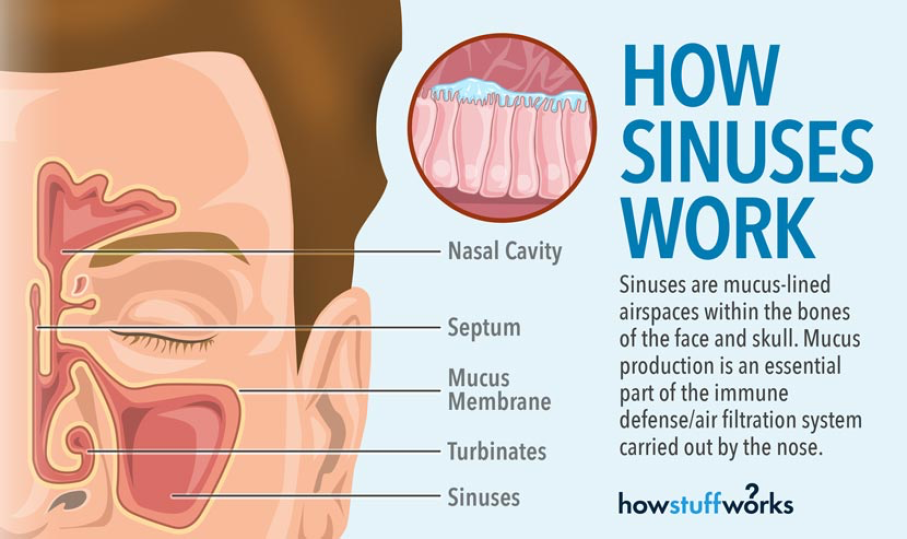 One day in 17th-century England, a woman was having trouble with one of her upper canine teeth. Accordingly, she had it extracted — the go-to treatment for a bad tooth at the time. But taking out the problem tooth didn't help, and soon she noticed (brace yourself) pus coming from the hole where her tooth used to be.

This was profoundly gross, but it got worse from there.

Trying to find the source of the problem, the enterprising woman turned to foreign objects — a pencil and a feather — to explore where her tooth had been. Before long, she was rushing to a doctor, insisting she'd just stabbed her own brain.

Luckily for her, this particular doctor happened to know exactly what was going on. Not many 17th-century physicians were clued in to the anatomical structures that make it possible for someone to insert a long, thin object through a tooth socket and surprisingly far up into the skull. But Nathaniel Highmore was so knowledgeable about it that the anatomy in question was named for him.

In other words: Our dental patient definitely wasn't touching her brain with a feather. She'd been poking around in Highmore's Antrum, better known these days as the maxillary sinus — a mostly air-filled cavity in the skull, next to the nose. To help her understand the situation, Highmore even showed her some of his detailed anatomical drawings.

For decades, it was thought that Highmore had been the first to make precise anatomical drawings of the maxillary sinus. Then in 1901, the scientific drawings of Leonardo da Vinci were discovered, and researchers learned the great artist had rendered a highly accurate image of the sinus in question a hundred years or so before Highmore.

Although nobody had made such nice drawings of the sinuses before da Vinci and Highmore, people had known about them for millennia. The ancient Egyptians appear to have been aware of them thanks to their penchant for removing the brains of the dead through their noses during the mummification process. Mind you, they probably didn't use the maxillary sinus for this stunt, but rather the ethmoid one [source: Mavrodi and Paraskevas]. That's right, there's more than one kind of sinus. There are actually four major sinuses: maxillary, ethmoid, frontal and sphenoid.

So, we've got some holes in our heads, and when we are experiencing sinus-related issues, they can make our teeth hurt. Interesting. But why? What's the purpose of having a network of air-filled pockets in the human head bone? 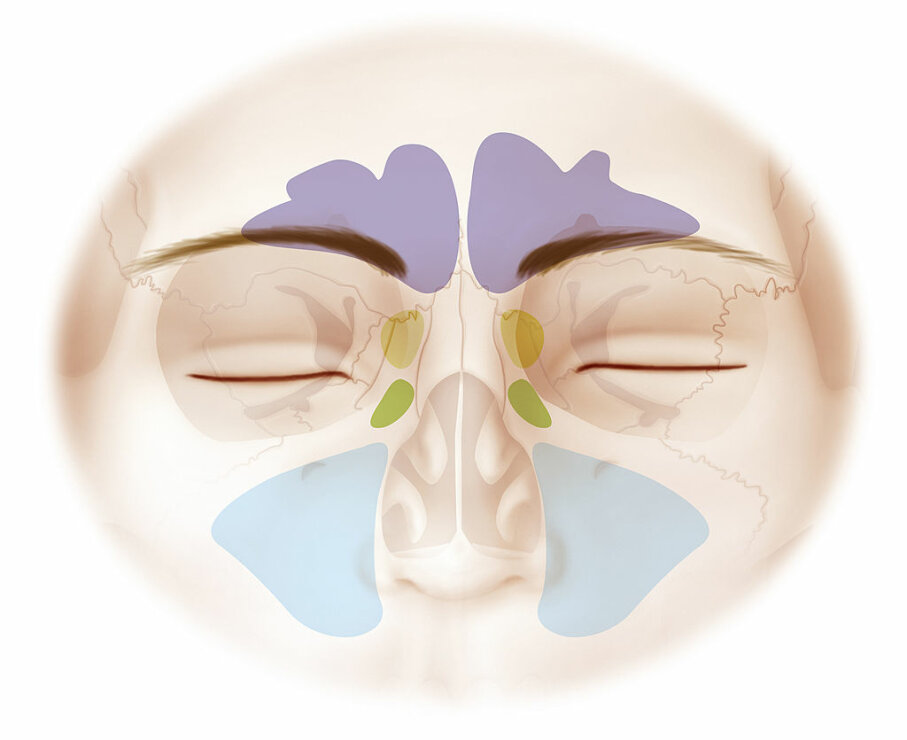 Your maxillary sinuses are on either side of your nasal cavity, back there in your cheekbones above your upper canines and molars. And — as shown that 17th-century medical story — the roots of those teeth sometimes poke up into the maxillary sinuses.

The frontal sinuses are in your forehead, just above your eyebrows, and your ethmoidal sinuses are a couple of little pockets between your eyes. The sphenoidal sinuses hang out way back in there behind your nose.

They're all linked by tiny channels collectively known as the osteomeatal complex, which connects them with the nasal passages. Their special lining, fittingly called mucosa, produces mucus [source: Jacobs]. Gravity drains the mucus into the nasal cavity.

Some researchers think sinuses are just accidental byproducts of evolution that have no real function. Sinuses expand and change form as we grow, so other specialists have claimed they actually take shape as the result of the chewing process, which creates enough pressure to open up little caves in our skulls. Still others theorize that atmospheric pressure does the trick as we develop after birth [source: Kurbel]. Our sinuses await an answer to these existential questions. To add to those unknowns, our sinuses aren't even symmetrical. Each cavity grows to a unique size and shape, making them as individual as our fingerprints.

On top of figuring out how they wind up there, we're also still working on why they're there. Two thousand years ago or so, the famed Greek physician Galen suggested sinuses existed to reduce weight in the head. Later theorists proposed that they help regulate the temperature and humidity of the air we breathe in, or that they relieve pressure on the nasal cavity when sneezing, or that they're needed for mucus production, or that they help with smelling, or that they're resonating chambers for our voices. Those theories sound neat, but they've all been refuted [source: Bergler]. Since we don't really know why they're there, we also don't know whether the different sinuses serve different functions.

One of the most controversial suggestions belongs to the highly disputed theory known as the "aquatic ape" idea of human evolution. According to this idea, our ancestors didn't evolve into modern humans on the African savannah as the conventional theory goes, but rather on the shores of rivers, lakes and oceans. If this were true, it could explain some of the peculiarities that set us apart from other apes and link us more closely to sea creatures: notably, our lack of fur, our big brains, our subcutaneous fat and our sinuses. Having sinuses makes perfect sense, according to the concept, because skulls full of air pockets are more buoyant than skulls without air pockets [source: McKie].

For whatever reason they evolved, our sinuses seemingly aren't just useless skull dugouts. In 1995 it was discovered that they produce large quantities of the gas nitric oxide. Nitric oxide can increase blood pressure and has antibacterial properties. In other words, your nose gas probably helps inhibit the growth of pathogens in the nasal cavity [source: Lundberg]. Mind you, current function shouldn't be confused with origin. Just because sinuses produce useful nitric oxide, that doesn't mean they evolved for that purpose. The gas production could be an incidental byproduct of a different process.

But if the sinuses help our immune system, we all know that system doesn't always succeed, and sometimes those pockets in our skulls are filled with more than friendly gases. 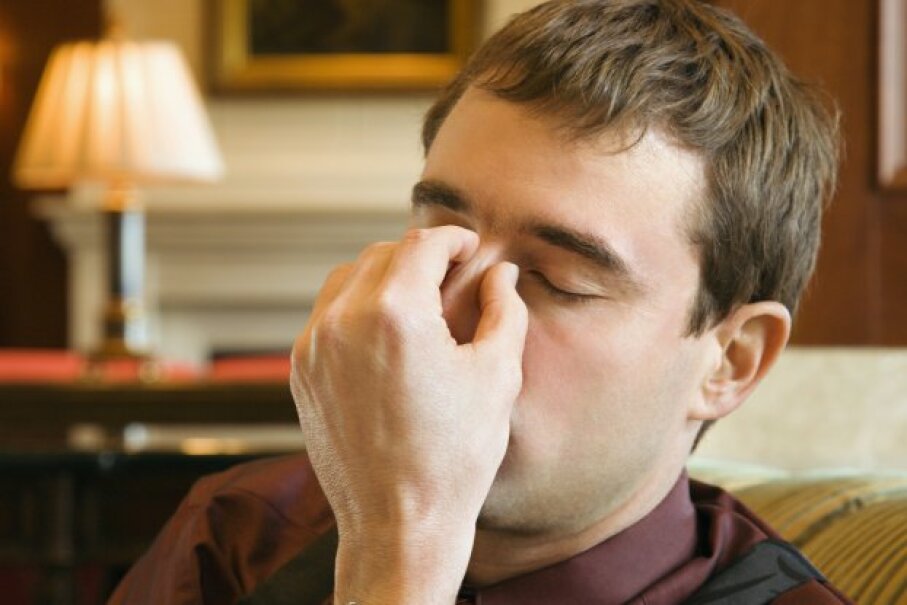 Lots can go wrong with sinuses. For one thing, you might have an extra one! Apparently about 10 percent of the population has extra empty headspace thanks to random genetic variations. There's only a certain amount of room in the head, so an extra sinus has to squeeze in there with the others, meaning the transition space, or ostium, of each of your sinuses will be smaller. The smaller your ostia, the worse for you. When those transition spaces get blocked up, the trouble starts.

And with or without an extra sinus you might just have small, narrow openings regardless. In any case, it's not as though these ostia are major throughways in anybody's head. They're tiny, and they get plugged up with unfortunate ease when the tissues in there are swollen by colds or allergies. The results are less than charming — pressure and headaches, nasal discharge, coughs, loss of smell, blocked ears and sometimes even bloody noses [source: Jacobs]. Headaches are particularly associated with sinus problems because of the pressure build-up in these little skull pockets when the movement of air and fluids through them is blocked.

All of these symptoms are related to sinus inflammation that can prevent mucus from draining into the nasal cavity. When those canals get clogged for too long and put pressure on the middle ear, you might experience ancillary problems like tinnitus, better known as "super annoying ear ringing." In some cases, long-term sinus problems and those nasty nosebleeds can be signs of a number of more serious problems — so if your sinus trouble just won't go away or if you have a fever, extreme fatigue or other symptoms, see your doctor.

Your sinuses are blocked, you've got a headache, can't breathe through your nose and to top it all off, can't taste a thing. Why? Is it because your tongue is all dried out from breathing through your mouth? Actually, your tongue doesn't do much tasting. It's a blunt instrument, capable of detecting just five differences: salty, sweet, bitter, sour and savory (or umami). Way up inside your nose, a little patch of specialized cells called the olfactory cleft fills in the subtle, but all-important blanks left undetected by your tongue, telling you the difference between a pear and an apple, or chocolate and caramel. When the tissue in your sinuses swells up and blocks the movement of air through your nasal region, your olfactory cleft receives no signals, effectively shutting down your sense of taste [source: Alt et al.].

Prevention and Treatment of Sinus Congestion 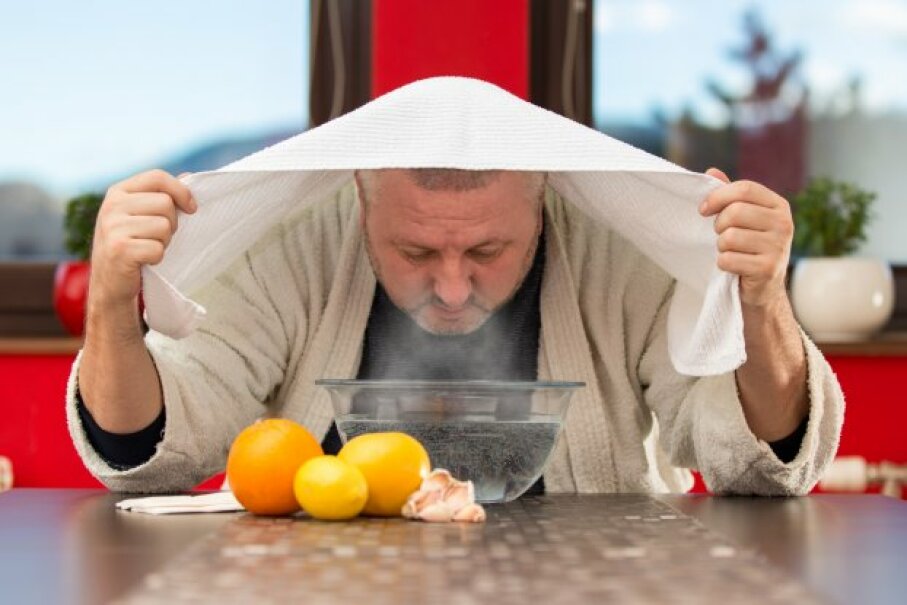 In the ancient ayurvedic tradition of the Indian subcontinent, deeply meditative states are achieved through careful attention to breathing patterns. Clear, easy breathing is therefore highly valued. Colds and allergies that block breathing passages are unwelcome, so the yogis developed something they called "jala neti," a Sanskrit term for "nasal irrigation," which is a pretty straightforward explanation of the process [source: NeilMed].

The concept is simple, but ingenious. Add a bit of salt to some warm water, and transfer it to a small teapot-shaped vessel equipped with a spout that fits the average nostril. Bend over a sink with your head tipped to one side. Press the spout up against whichever nostril is topmost and then start pouring. You'll feel weird as the water fills your nasal cavity and then even weirder when it starts pouring out of your bottom nostril. When all the water has gone through, blow your nose to clear out any excess.

Nasal irrigation with a neti pot is often recommended by doctors and is considered a safe and effective way to flush your nose and nasal region, as long as you're starting with sterile water and a sterile pot [source: Li]. The salt content is key to making the water flow more comfortably without giving you that unpleasant water-up-your-nose sensation you get when you turn upside down in a swimming pool.

About that whole "sterile water and pot" idea: It's extremely important that you use distilled or boiled water. If you're going to use tap water, make sure it goes through a filter with a pore size that's no bigger than a micron before using it, then, to be safe, boil the water and let it cool before irrigating.

Sinus problems can sometimes be alleviated by drinking plenty of water to thin out the mucus, allowing it to drain more easily. Wrapping a warm towel around your head can help reduce swollen tissues, and inhaling steam — whether it's from a shower, a bowl of warm water, or a humidifier — can moisten your nasal passages.

Decongestants like SUDAFED® and SUDAFED PE® products can also be effective in relieving sinus-related symptoms when they come from unpleasantness like allergies and colds. SUDAFED® products contain pseudoephedrine and SUDAFED PE® products contain phenylephrine. Both ingredients are meant to reduce the size of swollen blood vessels, which in turn allows tissue in and around the nasal cavities to return to normal size, so fluids (like mucus, for instance) can flow more freely. If you're also experiencing pain, allergies a cough, or other symptoms, many decongestants come packaged with ingredients that treat those symptoms as well.