Swine Flu is a Lab-engineered Virus 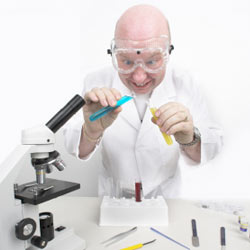 Why would a shadowy quasi-governmental cabal of world industrialists engineer a deadly and highly contagious virus, you may wonder. Well, for any number of reasons. What better way to shut down the American-Mexican border than by releasing a highly contagious virus somewhere on the other side of that border? Or, perhaps it's just to thin out the world population, thereby allowing the survivors to divvy up the remaining resources. Maybe your long-neglected swine flu research center needs to drum up some funding for a new office espresso machine.

Some believe the genetic makeup of the virus is so peculiar that it must have been made in a lab. Adding fuel to the Internet-conspiracy fire, a retired virologist in Australia -- Adrian J. Gibbs -- announced his belief that swine flu was a laboratory accident after Gibbs studied publicly available gene sequencing information on the virus.

If this was swept under the rug or ignored, Gibbs' claims may be reason for sustained suspicion about the origins of swine flu. However, the World Health Organization (WHO) took the claim seriously and sought analysis of Gibbs' claims from many different scientists, experts and related agencies. WHO concluded that swine flu is in fact a natural mutation and wasn't created in a laboratory.

The mixing of RNA strands from different viruses is rare, but it happens, and a mix of human, swine and bird flu viruses have reassorted into a single strain before without any human tampering [source: Brown].