It's Not Worth All the Hype 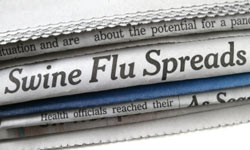 We've been through the SARS hype, the bird flu panic, and now swine flu? Much ado about nothing, right?

You couldn't be blamed for thinking so. Swine flu caused fewer deaths in 2009 than the common flu virus did. It has a low mortality rate, most people didn't catch it, and most of those who did experienced only mild flu symptoms before recovering. So what's with all the hype and alarm swirling the swine flu?

On the one hand, the WHO has given its full attention to the swine flu, labeling it a pandemic in June 2009. However, its spreading appearance around the globe has been somewhat anticlimactic, given all the official concern.

In this age of nonstop news and information, pundits, producers and publishers need something to fill up any voids in the 24-hour news cycle. However, the media for the most part is simply quoting their sources, and these sources -- chiefly the CDC and WHO -- are informing them that there is something for people to be concerned about.

The worst-case scenario is a bad one: The virus will mutate, become more contagious and more resistant to drugs and kill millions of people around the world. Another, more plausible scenario is that it doesn't mutate, but still infects a large percentage of people around the world, killing many, especially those in high-risk categories. Nobody knows, but the risk is real. Hope for the best, but be prepared for the rest.