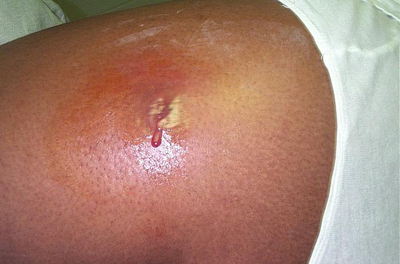 Physicians may choose to lance a MRSA boil rather than prescribe antibiotics.
Photo courtesy Bruno Coignard/Jeff Hageman/Centers for Disease Control

MRSA diagnosis goes beyond a quick once-over. If you think you have a MRSA infection, you should visit your doctor. He or she will take a biopsy -- the removal of a small bit of skin and soft tissue -- of the infected area and send it off for examination at a lab. Lab technicians try to grow the bacteria from the tissue sample. Within 48 hours, the results will be clear. One emerging test, CHROMagar -- a method that uses more sensitive equipment than traditional methods -- can predict with 95.4 percent accuracy whether MRSA is present in a tissue culture after just 24 hours.

Once a test comes back positive for MRSA, your physician will most likely prescribe a strict regimen of antibiotics. The powerful antibiotic vancomycin has been shown to be effective against MRSA. It should be said, however, that some hospitals have reported strains of MRSA that are resistant to vancomycin. Although MRSA has become resistant to many traditional antibiotics, modern medicine still has some powerful weapons in its arsenal. What's more, they're applying antibiotics much more deliberately than in the past, meaning that when they administer them against MRSA, they're making sure they kill every last bit of it. No survivors means no mutated strain that can live on and prosper.

But physicians have other methods of treating MRSA as well, some very low-tech. To prevent misuse or overuse of antibiotics, some physicians are lancing the infected boils and treating the infections externally instead of with drugs.

This method raises its own problems, however. Medical equipment -- even if it's sterile -- can introduce the infection on the skin into the body, causing more MRSA infections. But taking the extra precaution of sanitizing the skin around the infection before it's pierced has been shown to prevent this type of infection.

Strangely, treatment for MRSA may end up coming from a very unlikely place -- underground. Researchers are taking a second look at a very old cure, clay, which has been used for millennia as a folk medicine treatment for a variety of ailments. In early testing, a type of French clay has been shown to kill MRSA bacteria, as well as Mycobacterian ulcerans -- also known as the flesh-eating bacteria. Honey can also be used to treat it.

Although the results have been positive, science has yet to figure out why the clay kills the bacteria. It could be awhile before the results are in: The research being conducted on clay's effects on MRSA and other bacteria is part of a two-year study at Arizona State University.

Meanwhile, the best way to beat MRSA is not to let it infect us. As Benjamin Franklin said, an ounce of prevention is worth a pound of cure. This is truer than ever, with hospitals serving as such a viable setting for MRSA outbreaks. Read the next page to learn how you can keep yourself out of the hospital and uninfected with MRSA.