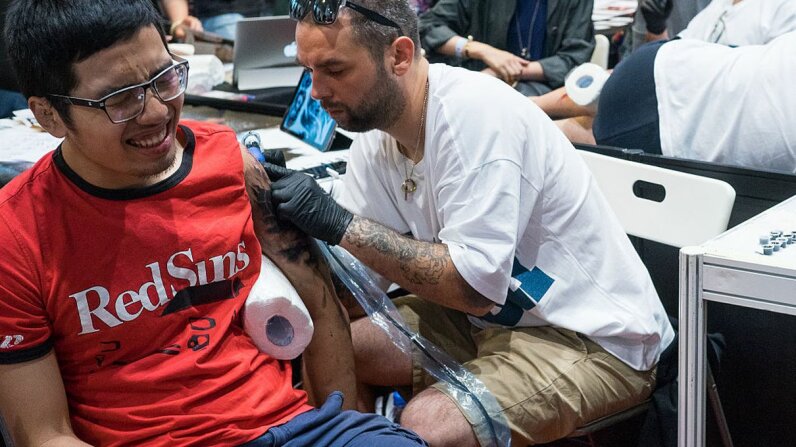 Getting and giving a tattoo both cause physical discomfort, as seen at the HK Tattoo Convention in Hong Kong. Yeung Kwan/Pacific Press/LightRocket via Getty Images

Painters and musicians aren't the only artists who suffer for their craft. Tattoo artists also endure a lot of discomfort during the creative process. The torture is far different from profound emotional suffering, a la Vincent van Gogh or self-inflicted pain for the sake of the project, like Leonardo DiCaprio in "The Revenant." Nope, tattoo artists are feeling all kinds of aches and pains due to lack of proper ergonomics, according to an Applied Ergonomics study by researchers at The Ohio State University. Their study is the first to look at the pains endured by the artists themselves (rather than their subjects), according to the researchers.

The investigators recruited 10 tattoo artists from central Ohio, measured their muscle exertions while they wore electrodes, and also took pictures of their posture. The scientists found that all of the artists exceeded the maximum exertion limits to avoid injury, especially in the trapezius muscles. These are the upper back muscles that connect the shoulder blades to either side of your neck and are a common site for pain. Back, shoulder and hand pains were also very common.

"There's no such thing as an official 'tattoo chair,' so artists adapt dental chairs or massage tables to make a client comfortable, and then they hunch over the client to create the tattoo," says Carolyn Sommerich, director of the Engineering Laboratory for Human Factors/Ergonomics/Safety at Ohio State and a study co-author,  in a press release.

The artists in the study were involved in one- to three-hour sessions but a typical tattoo session averages around five hours, most of which is spent bent over the subject in full, tense concentration. Such postures definitely don't do a body good. And tattooists usually don't have access to workers' compensation for on-the-job injuries, since they're mostly independent contractors.

Until industry-wide standards become the norm, the researchers suggest that tattoo artists try to support their backs and arms as much as possible and try out a variety of chairs to see which model works best for their bodies. Artists should also take regular breaks to stretch, change positions and move around, or even ask the client to change position for a while. "If the client can stand or maybe lean on something while the artist sits comfortably, that may be a good option," says Sommerich.

Finally, the researchers suggest that artists employ a mounted magnifying glass, so they don't have to lean so far in to view their work in progress.

Now That's Crazy
The reigning most tattooed person in the world (since 2006) is Lucky Diamond Rich, who's 100 percent covered in tats. That includes the inside of his mouth, ears, eyelids … and even his foreskin. Now that's dedication!