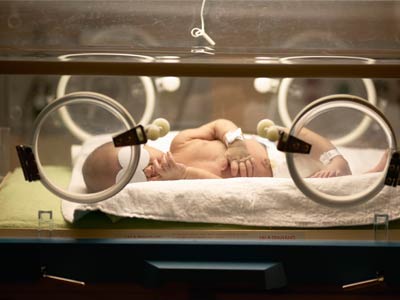 Newborn babies with jaundice are treated with colored light to reduce their levels of bilirubin, the yellow bile pigment that causes the condition. Left untreated, severe jaundice can lead to brain damage.
Roderick Chen/Getty Images

Cerebral palsy occ­urs when a child's brain is injured and permanently damaged. About 70 to 80 percent of the time, this damage happens sometime during pregnancy. Complications during childbirth account for 5 to 10 percent of all cerebral palsy cases, with the rest of the cases stemming from damage that occurred after birth up to age 2 or 3 [source: Wu]. There's no way of knowing exactly what caused a specific case, but researchers are aware of several conditions that impact the blood flow, and therefore the oxygen flow, to the baby's brain and cause the brain damage specific to CP. We'll start with looking at the cerebral palsy causes that happen during pregnancy.

Sometimes, cerebral palsy occurs when the baby's brain simply doesn't develop properly due to a genetic disorder or other problem in the womb. However, sometimes diseases, infections or other conditions carried by the mother are a factor. Mothers with conditions such as diabetes and epilepsy have a higher risk of having a baby with cerebral palsy. The same is true of mothers who acquire infections like rubella (German measles), toxoplasmosis (a parasite), kidney infections or herpes. Drinking alcohol, smoking and taking certain drugs during pregnancy can also cause the brain damage that leads to cerebral palsy.

There are also some conditions specific to pregnancy that can cause CP. Preeclampsia, a disorder that causes high blood pressure, can affect the blood flow in the umbilical cord and placenta and deprive the fetus of oxygen. The same is true for other placental conditions like abruptio placenta, when the placenta becomes detached from the uterine wall. Rh factor incompatibility, which happens when the mother's blood type is positive and the baby's is negative (or vice versa), can result in the baby being jaundiced upon birth. Babies with severe jaundice who don't receive proper treatment are susceptible to a specific type of brain damage called kernicterus.

­Birth injuries account for some cases. If labor is prolonged and the baby gets "stuck" in the birth canal, or if there's an emergency C-section, babies are at a higher risk of experiencing a brain injury that can lead to cerebral palsy. The same holds true for breech births, prolapsed cords (when the umbilical cord goes below the baby in the birth canal) or the doctor's use of forceps during delivery.

About half of all children with cerebral palsy are born prematurely (at less than 37 weeks) and weigh less than 3.3 pounds (1,510 grams) at birth. Premature babies are susceptible to a host of complications and infections that can cause cerebral palsy. One of these is intraventricular hemorrhage (IVH), or bleeding in the brain. If the bleeding is severe enough to cause swelling, pressure on the brain can lead to damage. Premature babies can also have brain damage due to breathing problems -- which keeps enough oxygen from reaching the brain -- and poor blood circulation in general.

But it's not just babies in danger. Children can acquire cerebral palsy as older infants or toddlers due to:

Next, we'll look at the four major types of cerebral palsy.

In a study published in the New England Journal of Medicine in August 2008, mothers with a high risk of pre-term delivery were given magnesium sulfate. The rate of cerebral palsy in the infants was cut in half. The study's leader, Dr. Dwight J. Rouse, claims that the drug can protect against brain damage caused by swelling, inflammation and lack of oxygen.