To understand how hip dysplasia occurs and how doctors treat it, you need to know a little bit about the hip joint itself. The hip is a ball-in-socket joint, or an enarthrosis. The rounded head of the femur forms the ball, which fits into the socket of the acetabulum. The hip forms the primary connection between the bones of the lower limbs and the axial skeleton of the trunk and pelvis. 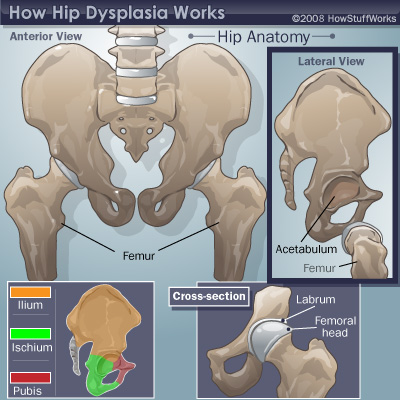 Three pelvic bones -- the ilium, the ischium and the pubis -- come together to form the acetabulum. The joint itself may not be fully ossified, or hardened into bone, until a person reaches the age of 25 years, which is one reason why early detection is important in hip dysplasia treatment. A strong, lubricated layer of articular hyaline cartilage covers both surfaces of the joint completely, helping it move more smoothly. A rim called the labrum grips the head of the femur and secures it in the joint. This increases the depth of the acetabulum.

If this isn't corrected, the hip joint will be unstable. In some cases, dislocation may also occur. Over the years, as the femoral head and acetabulum move without correct alignment, the cartilage in the joint wears down prematurely and unevenly. The result is differing degrees of osteoarthritis, depending on the severity of the misalignment. The osteoarthritis can occur on the joint head or in the socket itself. 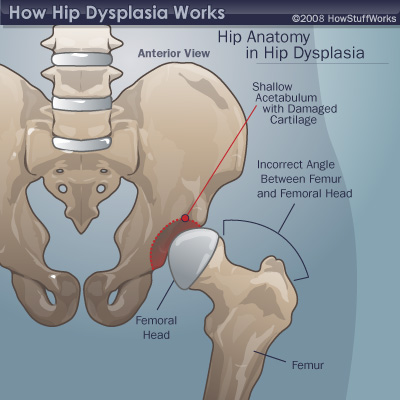 The exact anatomical features of hip dysplasia can vary from person to person. Both the hip socket and the femur can be affected.

­An atypically shaped thighbone can also be part of hip dysplasia. This can occur in addition to or in place of a misshaped acetabulum. The ball and shaft of the femur ideally form a 120- to 135-degree angle where they meet. But in hip dysplasia, that angle can change in one of two ways:

In either case, the length of the femur is affected -- it's shorted with coxa vara or lengthened with coxa valga. This creates additional imbalance within the hip joint and results in difficulty walking, pain and joint stiffness.

Doctors don't know exactly what causes hip dysplasia. However, a possible cause could be hormonal changes within the mother. During pregnancy, hormones loosen a woman's joints to allow them to expand and make room for the baby during delivery. These hormones are thought to cross over the placenta and cause the baby to have increased ligament looseness. The baby's position in the womb may play a role as well -- breech birth positioning and firstborn children have increased rates of developmental dysplasia of the hip (DDH). As many as one in 15 females born in breech position has DDH [source: Ramsey]. The left leg is more often involved due to the baby's positioning in the uterus. There is also a 10-fold increase in the frequency of hip dysplasia in children whose parents had DDH compared with those whose parents did not [source: Bjerkreim].

Next, we'll look at the symptoms of and treatment for hip dysplasia.

Dysplasia Demographics
Among Native Americans and Laplanders, the prevalence of hip dysplasia is much higher (nearly 25 to 50 cases per 1,000 persons) [source: Bjerkreim]. The exact cause of this increase isn't clear, but it may relate to genetics or swaddling practices.