Typically, hip replacement surgeries are considered when pain from osteoarthritis, caused by the normal aging process, drastically affects quality of life. Hip dysplasia can speed up this wear on the cartilage, making a total hip replacement (THR) necessary. A condition called avascular necrosis (AVN), caused by a loss of blood supply to the femoral head, often also necessitates a hip replacement because of the death of cartilage. 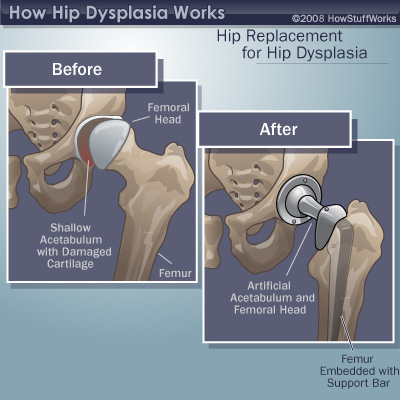 Patients with hip dysplasia may undergo hip replacement to completely replace the affected hip with a prosthesis.

The materials used to make artificial hip joints have changed significantly since the 1920s. Originally, an artificial socket was made from plastic, and a femoral head and neck were made from cobalt-chrome. Today, titanium has become more common than cobalt-chrome. Regardless of the metal type, the plastic socket wears away at roughly 1 millimeter per year against the metal ball, thus limiting the life of the artificial hip to 10 to 15 years. New plastics are thought to wear out a lot slower, but at this point there is no long-term data to prove if they last longer. Newer developments include metal-on-metal joints and ceramic-on-ceramic joints.

The basic design of the prosthesis is similar regardless of the materials or the manufacturer, and the surgery itself is unchanged by the materials used. The surgeon removes the femoral head and neck through an incision over the hip joint. He or she then inserts an angled shaft with a smooth, balled implant into the bone. The next step is to smooth out the socket side of the joint and fit it with a cup. Depending on the type of artificial joint being used, the cup will either be cemented into place with bone cement or left uncemented. The cementless joint is made in such a way that the bone naturally grows into the surface to keep it in place.

For those with hip dysplasia, there needs to be roughly 70 percent contact of the cup to the socket bone. In some cases, hip dysplasia patients do not have enough of a "roof" in the hip for this surgery to be successful.

There are several possible complications of hip replacement:

Read on to learn about what happens when THRs start to wear out.