Ortolani and Barlow maneuvers have been the standard techniques for detecting hip problems in babies for the last 70 years. The Ortolani maneuver starts with the baby in a supine position -- on his or her back -- without a diaper. The physician bends the infant's hip and knees to 90 degrees. Once in this position, the doctor abducts, or moves the infant's legs apart, into the frog-leg position. If the hip is dislocated, the femoral head slides into the hip socket during this movement. There is a palpable and audible clunk as the head slips back into the socket. Each hip should be tested individually. Hearing or feeling the clunk is called a positive Ortolani maneuver. 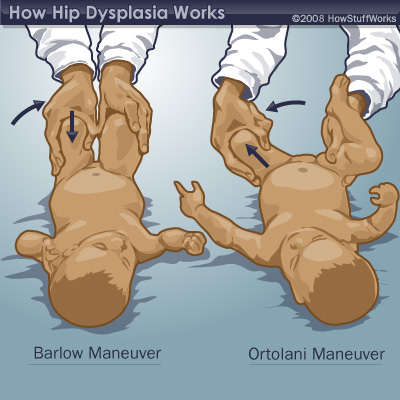 In the Barlow maneuver, the physician will examine each leg individually beginning with the infant lying in the supine position. If testing the left leg, the physician will support the pelvis with the right hand. Using the left hand, the doctor will flex and adduct the left leg, or draw it across the body. The hip will gently be pushed posteriorly -- toward the back -- along the line of the femur shaft. In this case, a positive test occurs if the physician feels the femoral head slip out of the acetabulum as the hip dislocates out of the socket.

Ultrasonograms, or ultrasounds, can also be useful for diagnosis, particularly for babies under 9 months of age. Prior to 9 months, babies have little bone, and X-rays show only bone. Ultrasound also allows the doctor to see multiple angles of the joint rather than the single, two-dimensional view an X-ray provides. An ultrasound exam can accurately show the location of the ball within the socket, and the doctor can stress the hip during the examination to determine the stability of the joint. Ultrasound can also show the cartilage in infants who do not yet have a lot of bone.

Once children develop sufficient bone, X-rays tend to be used because they can more clearly show the bones of the whole hip joint in one image. This makes them more useful than ultrasound after the age of 9 months.

The process of diagnosing an adult with hip dysplasia is a little different from diagnosing an infant -- we'll look at how on the next page.