There are a variety of pelvic osteotomies used to treat hip dysplasia. Some are used only on children, while others treat specific bone structure and reconstruction needs. Already popular in Europe, the Bernese, also known as the Ganz procedure or periacetabular osteotomy (PAO), has become a common treatment for adults in the United States. It was first performed in 1984 in Bern, Switzerland by doctors Reinhold Ganz and Jeffrey Mast. This operation can be performed on children over the age of 10 as well as on adults, usually under age 40. 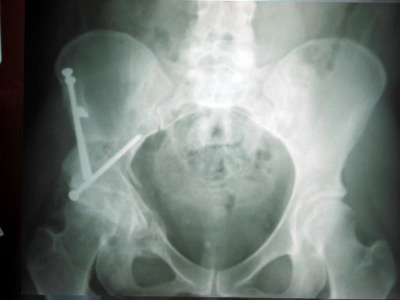 Bernese PAO is used in situations where the roof of the acetabulum does not cover the head of the femur the way it should. Using a series of controlled cuts, the surgeon separates the acetabulum from the pelvis. That's where the procedure gets its name -- "periacetabular" simply means "around the acetabulum." The surgeon can then rotate the acetabulum into a better position to cover the femoral head. During surgery, the doctor can also make subtle changes, such as increasing the amount of coverage in the front of the joint, or the anterior coverage. This surgery generally takes 4 to 5 hours depending on whether additional procedures are performed at the same time. Research suggests that a PAO can halt the destruction of the joint or prolong the use of the joint for those in early adulthood, postponing the need for a total hip replacement (THR).

After surgery, the patient will use crutches with minimal weight bearing on the affected leg for the first 6 to 8 weeks, followed by weight bearing with a crutch or cane until it's no longer needed. Physical therapy and the strengthening of the leg will take several months since muscles and tendons are affected by the surgery and weaken with lack of use.

The Bernese PAO also has advantages over other surgical options:

As with any surgery, there is a small risk of complications. The bone may not rejoin along the break, or abnormal bone may form on non-bone tissues. This abnormal bone is known as heterotrophic bone and can severely affect the joint's range of motion. This complication requires additional surgery. There are also several conditions that can arise as complications:

The Smith Petersen Approach­
The Smith Petersen Approach is a revised and improved anterior incision approach for the PAO. The big advantage of this modified approach is that it spares the majority of the hip abductors, or the muscles that move the leg away from the body. This speeds up recovery and helps maintain strength. While it's a successful approach, it does require extensive detachment of tendons and movement of the quadriceps muscle.