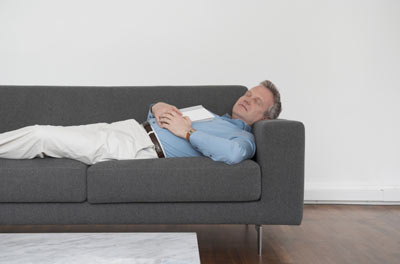 People with orthopnea have trouble breathing when they're lying down. It's a telltale sign of heart failure.
Khalid Hawe/Uppercut Images/Getty Images

Counting your pillows, not sheep, as you go to sleep at night might reveal a telltale sign of a serious heart condition.

People with some types of heart or lung problems often complain about difficulty breathing while lying down. For many with this condition, this trouble breathing or sensation of breathlessness is relieved only by sitting up straight or standing. Sometimes a person realizes that sleep is more comfortable when propped up with extra pillows under his or her head. This condition is called orthopnea, and it's commonly measured by the number of pillows needed to ease the breathing ("three-pillow orthopnea, for example").

It's important to report orthopnea to your doctor, even if you can control it by simply propping your head up while you sleep -- it may be a sign of heart failure danger. One study has shown that heart failure patients with persistent orthopnea have poorer prognoses and are at significantly higher risk of hospitalization than patients without orthopnea. The study concluded that this group of patients requires a more aggressive approach to improve their outcome.­­ 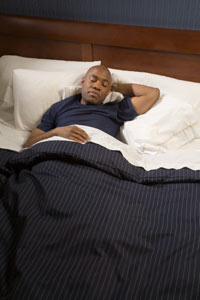 People with orthopnea often find that it's easier to sleep with a few pillows.
Johannes Kroemer/Image Bank/ Getty Images

In general, shortness of breath (dyspnea) is a common symptom of congestive heart failure. This is because increased fluid in the lungs can interfere with the exchange of oxygen, resulting in not enough oxygen reaching the tissues, This is most typically noticed during exercise, but it can also occur when a person is lying down -- that's when it's called orthopnea.

Orthopnea can be a subtle condition, in which a person notices that sleep is more comfortable with several pillows under his head, or a more severe one in which he can breathe deeply and comfortably only when sitting or standing. It may occur along with swelling of the feet or ankles. Orthopnea is a sign of heart failure. It is caused by congestion in the lungs -- and perhaps accompanied by accumulation of excess fluid in the lungs (pulmonary edema) -- that occurs as a result of left-sided heart failure.

Orthopnea is caused by the accumulation of too much fluid in the lungs (pulmonary congestion or fluid overload) when a person lies down. In a prone position, blood volume from the feet and legs redistributes to the lungs, which doesn't cause a problem for people whose hearts are pumping normally. However, in people with heart failure, excess blood in the lungs can cause breathing problems or shortness of breath.

If excess fluid is causing breathing problems like orthopnea or paroxysmal nocturnal dyspnea, doctors may recommend that the patient eat a low-sodium diet, because too much sodium can contribute to fluid overload. They may also prescribe diuretics (sometimes called "water pills"), medicines that help the body eliminate excess sodium and water. However, diuretics sometimes become less effective over time, so after awhile, many people with fluid overload must be hospitalized for additional treatment.

­If these medicines don't work to relieve the fluid overload, doctors may prescribe a procedure known as ultrafiltration, in which blood is passed through a small machine that filters out the excess fluid.

Paroxysmal nocturnal dyspnea, a condition related to orthopnea, is experienced by some people with heart failure. It's a frightening attack of shortness of breath that can awaken a person suddenly from sleep and that is relieved only by sitting or standing up. Paroxysmal nocturnal dyspnea isn't relieved as quickly as is orthopnea -- and it doesn't occur right after the person lies down, but usually one or two hours after they fall asleep. People with heart failure may experience orthopnea, paroxysmal noctural dyspnea, both, or neither.