by Maria Trimarchi
Prev NEXT
2

It's Ruining Your Mood -- and Your Creativity

That coworker who can’t collaborate and is always in a foul mood may just need to get up and move around more often. © rilueda/iStock/Thinkstock

It's not just your body that's taking the brunt of the damage from all that sitting. When the body isn't working efficiently to circulate blood, oxygen and important hormones and chemicals as it should, your mind goes dull, and your mood and self-esteem take a nosedive.

In 2011 the Centers for Disease Control and Prevention (CDC) Take-a-Stand study found that employees who were able to stand while working reported they were in better moods and had higher self-esteem than when they sat all day. Eighty-seven percent reported feeling more energized and 71 percent reported they felt more focused, in addition to overall fewer complaints of fatigue, tension and depression [source: CDC, JustStand.org].

While additional studies have found slouching is associated with negative physiological changes, depressive moods and low energy levels, standing, it turns out, invigorates your body's processes, boosts your metabolism, strengthens muscles and bones and burns as many as 20 percent more calories compared to sitting [source: Savoie]. 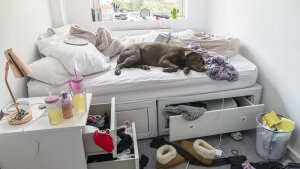