Number One with a Bullet 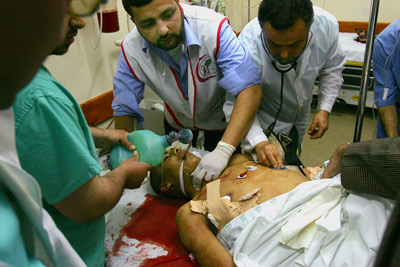 Wound ballistics is the study of the effects of projectiles on bones, tissue and organs. The study begins if medical staff can't save its patient.
Samuel Aranda/AFP/Getty Images

There is no existing body of work regarding the best place of the anatomy to be shot, but there are a few contenders. To understand where the best place to be shot is, you must first understand a little bit about bullets and the effects they have on the human body.

The study of what bullets do to tissue, bone and organs is called wound ballistics, and this field has come up with some definite conclusions about the destructiveness of projectiles on humans. A bullet is a carrier of force, and its purpose is to transfer that energy within the body. This energy causes all of the injuries sustained, whether directly or in a secondary manner.

The injury inflicted by a bullet is directly related to the bullet's kinetic energy. This is a measure of the bullet's weight, velocity and gravitational trajectory. The combination of the three describe how much damage a bullet will cause.

As a bullet enters the body, it causes laceration and crushing wounds. The bullet punctures tissue and bone, crushing or pushing aside anything in its path. When a bullet passes through tissue, it creates a cavity that can be 30 times wider than its track (the path it takes). This cavity closes behind the bullet less than a second after the bullet passes, but the cavitation it causes can damage nearby tissue, organs and bones via shock waves.

The type and amount of injury sustained from a bullet also depends on what a bullet encounters. Soft tissue can carry shock waves more easily than bone, but since bone is dense, it absorbs more force (and damage). Bones also splinter, causing further damage as the fragments travel through the body as projectiles themselves.

A bullet that passes through the body (creating an exit wound) generally will cause less damage than one which stays in the body, because a bullet that stays in the body transfers all of its kinetic energy (and ensures maximum damage to tissue). This is the aim of most modern ballistic design. Jacketed bullets are designed to fragment after impact, dividing their destructive power. Hollow-point and soft bullets are designed to flatten and spread, creating a wider area for their tracks and increasing the damage caused by shock waves and cavitation.

Based on this information, we can make some conclusions about the areas you might least like to take a bullet and deduce the best place from there. A bullet can shatter bone, and bone can also ensure a bullet won't leave the body. So you'd want to stay away from areas with a lot of bone mass, such as the ribs. You would also want to stay away from nerve bundles, as Ed Sizemore mentioned. And, most importantly, you'd want to keep your vital organs away from a bullet. This definitely counts your torso out and your head, too.

So it looks like your arms and legs are the best place to take a bullet. But wait: Your thighs and upper arms both feature important arteries -- your femoral and brachial arteries. If a bullet severs either one of these, the loss of blood can cause death in just a few minutes. So the legs and arms are out.

Based on their location and relative distance from vital organs, your hands or feet appear to be the best place to take a bullet. Getting shot in a foot or hand would certainly shatter most of the many bones there, and it would be an extremely painful experience, but it would pose little deadly threat. What's more, although you have plenty of bones there to shatter, the fragments are less likely to travel easily to your vital organs, like your heart. Plus, with your hands and feet as relatively thin as they are, a bullet also has a better chance of passing through your body before it transfers the full extent of its power. You might suffer a disability, but you'd be more likely to live through the experience.

For more information on bullets, medicine and related topics, visit the next page.

How a gunshot wound helped us learn about digestion

In 1822, Canadian Alexis St. Martin was accidentally shot beneath his left breast at close range. The musket ball tore away parts of his left side, exposing bone, tissue and organs. His stomach was exposed and punctured, and a physician who attended him, Dr. William Beaumont, concluded St. Martin would soon die.

He survived an additional 66 years, though his wound never healed. Dr. Beaumont used St. Martin's exposed stomach and hole to extract digested food to determine the functions of the stomach, which had been only theorized until St. Martin's (educationally) fortunate accident [source: University of Houston].