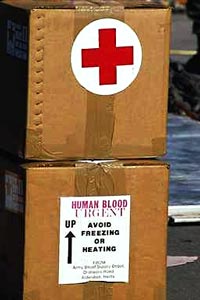 A unit of blood is 1 pint (450 milliliters) and is mixed with chemicals (CPD) to prevent clotting. Each year, approximately 12 million to 14 million units of blood are donated in the United States. Generally, a blood donor must be at least 17 years old, be healthy, and weigh over 110 pounds.

Prior to donating blood, the donor is given an information pamphlet to read. A health history is taken to ensure that the donor has not been exposed to diseases that can be transmitted by blood, and to determine if donating blood is safe for that person's own health. The donor's temperature, pulse, blood pressure and weight are obtained. A few drops of blood are obtained to make sure the donor is not anemic. It usually takes less than 10 minutes for the blood to be removed once the needle has been placed. Sterile, single-use equipment is used so there is no danger of infection to the donor. Donors should drink extra fluids and avoid exercise that day. Blood can be donated every eight weeks.

Autologous blood donation is the donation of blood for one's own use, usually prior to surgery. Apheresis is the procedure in which only a specific component of a donor's blood is removed (usually platelets, plasma or leukocytes). In this way, more of that specific component can be removed than can be derived from one unit of blood.

Let's look at each of these blood components in more detail.

Plasma (fresh frozen plasma), once thawed, is transfused to treat bleeding disorders when many clotting factors are missing. This occurs in liver failure, when too much of a blood thinner called Coumadin has been given, or when severe bleeding and massive transfusions result in low levels of clotting factors.

Platelets are transfused in people with low platelet count (thrombocytopenia) or abnormally functioning platelets. Each unit of platelets raises the platelet count by approximately 5,000 platelets per microliter of blood.

Albumin makes up 60 percent of the protein in plasma, is produced in the liver and is used when blood volume needs to be increased and fluids have not worked, as in cases of severe bleeding, liver failure and severe burns.

Immunoglobulins are given to persons who have been exposed to a certain disease such as rabies, tetanus or hepatitis to help prevent that disease.

Factor VIII concentrate and cryoprecipitate are used in hemophilia A (classic hemophilia) since this is caused by a factor VIII deficiency.

Factor IX concentrate is used in hemophilia B ("Christmas disease"), which is caused by a deficiency of clotting factor IX.