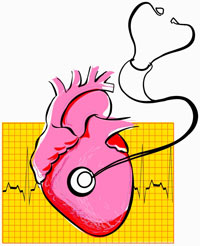 There are three naturally occurring protein hormones in the body that cause natriuresis. They are called A-type, B-type, and C-type natriuretic peptides (small protein molecules). These peptides lower the concentration of sodium in the blood, which tends to lower blood volume because the sodium takes water with it into the urine. Many diuretic drugs take advantage of this mechanism to treat medical conditions like high blood pressure. In fact, the natriuretic peptides are sometimes called the body's "natural diuretics."

Natriuretic peptides are produced by the heart and the blood vessels. The body produces more of them when it's affected by diseases -- like heart failure, kidney failure, and liver disease -- that are characterized by an expanded fluid volume. .

­­The natriuretic pe­ptides work in opposition to the renin-angiotensin-aldosterone system, a hormonal system that plays an important role in controlling the amount of sodium the body excretes. The interaction between these two systems is complex, and their interplay affects many physiological processes, including heart function, relaxation and contraction of blood vessels, blood pressure, the excretion of sodium and water, and aspects of the nervous system.

On the next page we'll learn about the different types of natriuretic peptides.

To learn more about natriuretic peptides, take a look at the links on the next page.

Children Can Regrow Their Fingertips. How Cool Is That?
What does it mean when someone has 20/20 vision?
Why do you have two lungs but only one heart?