Browse the article Is too much TV really bad for your eyes? 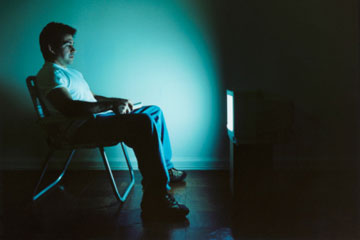 Watching TV in a lawn chair in a dark room may cause eyestrain.
Michael Cogliantry/Getty Images

Every kid knows the list of warnings from Mom: "If you cross your eyes, they'll get stuck that way." "Gum stays in your tummy for seven years." "Cracking your knuckles causes arthritis." "Too much television is bad for your eyes." Some of these Mom-isms are true; some aren't. And some exist in a murky place in between fact and fiction.

"Watching too much television is bad for your eyes" is one of those murkier examples. The answer isn't all that clear. Most experts agree that staring at the television (and computer monitors) won't cause permanent damage to a person's eyes. However, focusing your eyes too long on any one thing can cause eyestrain, a temporary (but irritating) problem. We'll talk more about eyestrain later in the article.

So, if watching too much television won't actually impair your vision, where did this warning come from? Interestingly enough, at one time, the warning was based in truth. Back in the 1960s, more and more families could afford televisions, and it was a pretty new and exciting technology. Of course, these weren't the flat-screen LCD televisions we enjoy today. Back then, televisions were big, boxy affairs -- full of tubes and wires and bulbs.

Around 1967 or so, General Electric Company (GE) disclosed the fact that many of their color televisions were, due to a factory error, emitting excessive X-rays. Overexposure to X-rays can be dangerous, and Public Health Service officials estimated the radiation from the tube was 10 to 100,000 times the rate considered safe and normal. GE corrected the problem by shielding the tubes inside the television with leaded glass.

At the time, health officials stated the excessive levels of radiation wouldn't harm most viewers. However, they did warn against children sitting close to the television for more than an hour, due to the X-rays shooting through the vents on the bottom of the set. Even though GE recalled and repaired the faulty television sets, the threat of physically damaging X-rays remained in people's thoughts. So, that's one reason why Mom and Dad warn us not to spend too much time watching TV.

Another reason? Children typically sit on the floor to watch television, with their heads tilted up. This causes more eyestrain than sitting eye-level with the television set. Again, eyestrain isn't a permanent problem.

Next, we'll talk about the relationship between technology and eye problems. And later, you'll learn more about eyestrain and how to prevent it. Keep reading (but don't forget to rest your eyes)!

Link Between Myopia and Modern Civilization

Most eye doctors will assure you that watching too much television won't permanently damage your eyes. However, it's worth noting a few interesting studies on the subject. Several of these reports have illustrated a link between myopia (nearsightedness) and environment.

First, a little bit about your eyes and myopia. The cornea and the lens are the parts of the eye that focus images. In a normal eye, these parts have a perfect shape and curve. The curve refracts light so it makes a sharply focused image right on the retina. In a myopic eye, the cornea or lens usually curves too much, causing a refractive error. This causes the light to focus in front of the retina, making faraway objects appear blurry.

If you suffer from myopia, you can see nearby objects clearly, but objects far away are out of focus. You might have to squint to see more clearly. Myopia can be slight or severe and is easily treated with corrective glasses or contact lenses.

Some people believe that environmental factors may also cause myopia -- like sitting too close to the television or computer monitor, or too much close reading. Back in the late 1960s, a controversial study of Eskimo families ignited this debate. Researchers studied a group of Eskimos who hadn't been introduced to formal schooling or modern civilization until around World War II. The researchers made an interesting discovery -- in this group, people aged 56 or older had zero incidence of myopia. Parents aged 30 and up had about an 8 percent incidence, but their children -- who were the first of their group to start reading -- had a 59 percent incidence of myopia. The obvious conclusion was that close focusing, like reading, caused myopia. Some question this study, however, since the children who were tested were brought to the eye clinic because their parents already thought they had vision problems [source: Adams].

More recently, an Australian study found that children who spend more time outside don't develop myopia as often as children who spend more time indoors. The study compared two groups of children. Both groups spent an equal amount of time watching television, reading and playing computer games. However, one group spent only 30 minutes a day outside, while the other group spent about two hours outside. The second group had much fewer instances of myopia, leading researchers to believe that the sun may help regulate growth of the eyeball during childhood. Time spent watching TV didn't make much of a difference.

While watching TV may not cause blindness or any other permanent damage to the eyes, it can cause eyestrain. More about that on the next page.

Do Carrots Really Improve Your Vision?

Another thing Mom always told us to do? "Eat your carrots for better eyes!" It's true that carrots have Vitamin A, a deficiency of which can cause blindness. But eating more than the recommended daily allowance won't improve your vision. In reality, the carrots/eyesight story dates back to World War II. The British government didn't want the Germans to know that the reason they were shooting down so many German planes was because of their new radar system. So they spread propaganda that said their pilots were eating tons of carrots to improve their vision.

It's unlikely that watching too much television, reading too many books or staring at a computer screen will permanently damage your eyes. However, all of these activities can cause eyestrain, which isn't something you should ignore.

Eyestrain is when your eyes get overtired from too much use. You can get eyestrain from watching television in a dark room, excessive computer use or even driving. Reading in dim light can contribute to eyestrain as well. Any time you intensely focus your eyes on something for a long period, you're at risk for eyestrain.

Symptoms of eyestrain include:

Eyestrain is a short-lived condition that you can treat yourself. For most people, the treatment simply is to rest your eyes. Take regular breaks from intense focus -- about five minutes each hour. Blink often to keep your eyes moist.

If your eyes are dry, try some over-the-counter artificial tears to re-moisten them. Also, ensure your glasses or contact lenses are appropriate and up-to-date for your needs. You can even buy some that are specially suited for computer work.

To prevent or minimize future eyestrain issues, you can make several changes to your work and home environments. Here are a few tips:

For more on television and eyestrain, look at the links on the next page.

Dry eye occurs when the eye doesn't produce enough moisture to keep itself protected and comfortable. Some people suffer from chronic dry eye, brought on by aging or simply an imbalance within the eye. However, those of us who work in front of a computer all day may suffer from dry eye from time to time. When we focus intensely on one thing for a while, we don't blink as often. Blinking is what keeps our eyes lubricated. You can avoid dry eye by remembering to blink, avoiding eyestrain, and using moisturizing eye drops. If you feel yours is a chronic condition, visit your doctor to find out about further treatments.