by Shanna Freeman
Prev NEXT
6 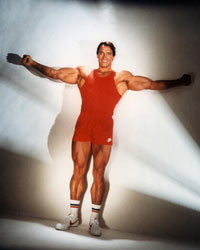 Arnold Schwarzenegger in 1985, long before his days as governor of California
Harry Langdon/Getty Images

A natural athlete, Arnold Schwarzenegger began lifting weights in his mid-teens, deciding early in life to become "the best-built man in the world" [source: Schwarzenegger.com]. He became known as the "Austrian Oak" during his bodybuilding career. After a mandatory year in the Austrian army, Schwarzenegger began competing in bodybuilding events. In 1966, at age 19, he won Best Built Man in Europe, Mr. Europe and an International Powerlifting Championship.

By the end of his bodybuilding career, Schwarzenegger had won Mr. Olympia seven times and defended his Mr. Universe titles in both the amateur and professional divisions multiple times. He still holds the record as the youngest-ever Mr. Olympia.

He also starred in the 1977 bodybuilding documentary "Pumping Iron" along with other bodybuilders of the era. The film illustrated the Golden Age of bodybuilding, in which the sport focused more on definition and less on body mass and muscle size. This was just the beginning of his long and hugely successful film career.

Schwarzenegger retired from competition in 1970, returning once more in 1980 to win Mr. Olympia. He continues to support bodybuilding, beginning his own competition named the Arnold Classic (now the Arnold Fitness Weekend) in 1989.

Schwarzenegger has admitted that he used steroids before they were criminalized. Some have criticized him for his continued support of the sport, given that steroid use is known to be rampant in bodybuilding today, but Schwarzenegger's press secretary said in 2005 that "It's where he came from, and he's proud of it" [source: Fox News].

Now, let's take a look at the Hulk.