In a moment of embarrassment, your face may flush and suddenly feel warm. But during times of intense concentration, the opposite is true: you're more likely to keep a cool head, or rather, a cool face, according to new research.

A study that evaluated facial thermal temperatures revealed that as a person engages in intense mental tasks, their face, and in particular the area around the nose becomes cooler. The study, by researchers at the University of Nottingham's Institute for Aerospace Technology and published in the journal Human Factors, paves the way toward applying thermal cameras in the workplace as a tool to assess how focused or possibly overwhelmed a worker might be.

"This could be critically important in contexts where safety depends on a person's concentration," explains Sarah Sharples, professor of human factors at the University of Nottingham and co-author of the study, along with lead author Adrian Marinescu.

One arena where a frazzled worker could become a deadly serious concern is in the cockpit. Passenger air traffic has doubled every 15 years since the 1980s, and it is expected to double again by 2034, according to an Airbus Global Market Forecast published in 2015. The forecast predicts that pilots may be operating in increasingly congested skies and, more often, without copilots. If air traffic controllers and others on the ground can detect through thermal facial imaging when a pilot is in a moment of intense concentration, they can offer to help, perhaps through remote control mechanisms, or at least not further distract the pilot with unnecessary communications.

"It's useful to anticipate when people are starting to struggle with their workload because we can then intervene and support that work," Sharples says.

To evaluate how temperatures within a person's face change during periods of concentration, the researchers assembled 14 students and faculty members at the university and had them complete computer-based tasks of increasing difficulty. As the subjects completed each challenge, breathing and pulse rates were recorded and a thermal camera took detailed readings of temperature from variously mapped locations on their faces. The researchers found that the link between the difficulty of each task and the coolness of the subjects' facial temperatures was striking.

"We expected that mental demands on an operator would result in physiological changes, but the direct correlation between the workload and the skin temperature was very impressive, and counter-intuitive – we were not expecting to see the face getting colder," coauthor Alistair Campbell Ritchi of the University of Nottingham's Bioengineering Research group said in a press release. The results were later replicated among a sample of pilots as they operated flights on simulated helicopters.

There are a couple of possible explanations for why the nose area, in particular, becomes cooler with increased concentration, Sharples says. One is that breathing rate tends to increase as a person's mental workload increases ("This makes sense because if there is more air going in and out of the nose, then temperature would decrease," she explains.) The other is that during periods of high mental workload, blood diverges to the prefrontal cortex of the brain. That could mean, Sharples says, that more blood is flowing away from the nose and toward the prefrontal cortex.

"It's probably a combination of both of these factors," Sharples says. She adds, however, that there were a few exceptions to the cool-nose phenomenon. For that reason, she says, "We would recommend if this were to be used in a real-world context that there be some baseline testing to understand how close the relationship is in each individual between facial temperature and workload."

Arcangelo Merla, director of the Infrared Imaging Lab at the Institute for Advanced Biomedical Technology at Italy's University of Chieti-Pescara, agrees that baseline testing is critical when interpreting changes in people's facial temperatures. Merla's research has shown that facial temperatures can reveal a range of conditions from whether or not a person is lying, to feelings of fear to stirrings of lust. Merla says he has also found that the temperature of the nose often offers a key signal.

"Reading nose temperature is an effective physiological tool as an indicator of a transition state," Merla says. "But the best approach is to take into account changes in temperature across the entire face."

Apart from pilots, Sharples envisions that thermal cameras could play a role in assessing workload in other settings, including in factories where workers interact with large machinery. But if the idea of your boss keeping tabs on you via a thermal camera feels intrusively Big Brother, you're not alone. Sharples asks, for example, who would "own" a worker's thermal data? The worker or the employer?

"You can imagine a situation where thermal imaging data, intended for real-time monitoring, could be stored and then presented during an end-of-year performance report," she says. "It's my feeling that these kinds of technologies will increase in the workplace so we have to make absolutely sure we deal with all the ethical, legal and social implications."

Now That's Interesting:
The common idea that a sick dog's nose will be hot and dry, while a healthy dog will have a cold, wet nose is a myth. The temperature of a dog's nose fluctuates constantly, even from hour to hour. It can depend on the environment, the weather, or even what sort of activity the dog has been involved in recently. A dog can be perfectly healthy and have a warm, dry nose or be critically ill and have a cold, wet nose. 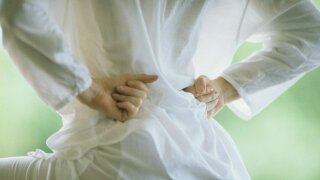 Your Body Aches Have Nothing to Do With the Weather 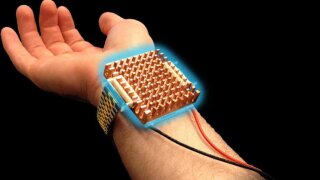 Could a wristband replace air conditioning? 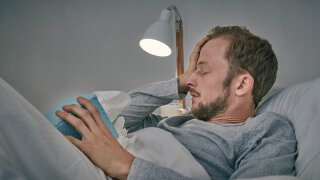 Why Does Your Body Temperature Rise When You Have a Virus Such as the Flu?