Browse the article How Nerves Work 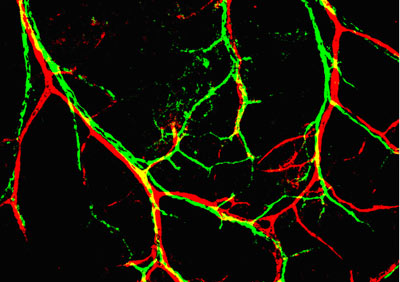 Consider this. You touch a hot object and immediately drop it or withdraw your hand from the heat source. You do this so quickly you don't even think about it. How does this happen? Your nervous system coordinated everything. It sensed the hot object and signaled your muscles to let it go. Your nervous system, which consists of your brain, spinal cord, peripheral nerves and autonomic nerves, coordinates all movements, thoughts and sensations that you have. In this article, we'll examine the structure and functions of your nervous system, how nerve cells communicate with each other and various tissues and what can go wrong when nerves become damaged or diseased.

The Spinal Cord and Neurons

The spinal cord extends through hollow openings in each vertebra in your back. It contains various nerve cell bodies (gray matter) and nerve processes or axons (white matter) that run to and from the brain and outward to the body. The peripheral nerves enter and exit through openings in each vertebra. Within the vertebra, each nerve separates into dorsal roots (sensory nerve cell processes and cell bodies) and ventral roots (motor nerve cell processes). The autonomic nerve cell bodies lie along a chain that runs parallel with the spinal cord and inside the vertebrae, while their axons exit in the spinal nerve sheaths.

The brain, spinal cord and nerves consist of more than 100 billion nerve cells, called neurons. Neurons gather and transmit electrochemical signals. They have the same characteristics and parts as other cells, but the electrochemical aspect lets them transmit signals over long distances (up to several feet or a few meters) and pass messages to each other.

Neurons come in many sizes. For example, a single sensory neuron from your fingertip has an axon that extends the length of your arm, while neurons within the brain may extend only a few millimeters. Neurons have different shapes depending on what they do. Motor neurons that control muscle contractions have a cell body on one end, a long axon in the middle and dendrites on the other end; sensory neurons have dendrites on both ends, connected by a long axon with a cell body in the middle.

Neurons also vary with respect to their functions:

In peripheral and autonomic nerves, the axons get bundled into groups, based on where they're coming from and going to. The bundles are covered by various membranes (fasciculi). Tiny blood vessels travel through the nerves to supply the tissues with oxygen and remove waste. Most peripheral nerves travel near major arteries deep within limbs and close to the bones.

Next, we'll learn about neural pathways.

The simplest type of neural pathway is a monosynaptic (single connection) reflex pathway, like in the knee-jerk reflex. When the doctor taps a certain spot on your knee with a rubber hammer, receptors send a signal into the spinal cord through a sensory neuron. The sensory neuron passes the message to a motor neuron that controls your leg muscles. Nerve impulses travel down the motor neuron and stimulate the appropriate leg muscle to contract. Nerve impulses also travel to the opposing leg muscle to inhibit contraction so that it relaxes (this pathway involves interneurons). The response is a quick muscular jerk that does not involve your brain. Humans have lots of hardwired reflexes like this, but as tasks become more complex, the pathway "circuitry" gets more complicated and the brain gets involved.

We have talked about nerve signals and mentioned that they are electrochemical in nature, but what does that mean?

To understand how neurons transmit signals, we must first look at the structure of the cell membrane. The cell membrane is made of fats or lipids called phospholipids. Each phospholipid has an electrically charged head that sticks near water and two polar tails that avoid water. The phospholipids arrange themselves in a two-layer lipid sandwich with the polar heads sticking into water and the polar tails sticking near each other. In this configuration, they form a barrier that separates the inside of the cell from the outside and that does not permit water-soluble or charged particles (like ions) from moving through it.

So how do charged particles get into cells? We'll find out on the next page. 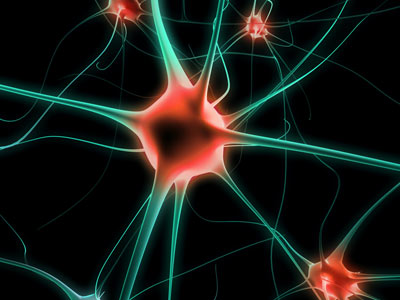 Because ions are charged and water-soluble, they must move through small tunnels or channels (specialized proteins) that span the cell membrane's lipid bilayer. Each channel is specific for only one type of ion. There are specific channels for sodium ions, potassium ions, calcium ions and chloride ions. These channels make the cell membrane selectively permeable to various ions and other substances (like glucose). The selective permeability of the cell membrane allows the inside to have a different composition than the outside.

For the purposes of nerve signals, we are interested in the following characteristics:

When nerves grow, they secrete a substance called nerve growth factor (NGF). NGF attracts other nerves nearby to grow and establish connections. When peripheral nerves become severed, surgeons can place the severed ends near each other and hold them in place. The injured nerve ends will stimulate the growth of axons within the nerves and establish appropriate connections. Scientists don't entirely understand this process.

The nerve signal, or action potential, is a coordinated movement of sodium and potassium ions across the nerve cell membrane. Here's how it works:

There are a few things to note about the propagation of the action potential.

On the next page, we'll learn about how nerves communicate with each other.

Let's look at this process in a neuron that uses the neurotransmitter serotonin:

Next, we'll learn about the different types of sensory neurons.

Neurological activity is an important phase in coordinating digestion. Neurobiologist Dr. Michael Gershon of Columbia University has written about a layer of 100 billion nerve cells in the stomach. This "second brain" coordinates digestion, works with the immune system to protect you from harmful bacteria in the gut, uses the neurotransmitter serotonin and may be implicated in irritable bowel syndrome and feelings of anxiety (like butterflies in your stomach) [source: Psychology Today].

The nervous system has many types of sensory neurons. Nerve endings on one end of each neuron are encased in a special structure to sense a specific stimulus.

What happens when nerves are damaged or diseased? We'll find out on the next page.

A physician may evaluate your nerves by testing how well you sense touch, pain or position when a limb is manipulated. This information can tell him that a functional connection exists. In some cases, he may conduct a nerve conduction velocity test to evaluate how well the nerve conducts an impulse. In this test, two small electrodes are placed a fixed distance apart from each other on the surface of the skin above a nerve. One electrode electrically stimulates the underlying nerve while the other records the corresponding electrical activity in the nerve. The recording shows the time it takes for the nerve to conduct the electrical impulse across the distance. By dividing the distance by time, the physician (or the machine) calculates the conduction velocity. The test is often performed when a conduction block or demyelinating disease (like multiple sclerosis) is suspected.

Nerve activity can be affected by toxins, trauma and disease.

Your nerves must conduct impulses correctly for you to regulate your internal environment, respond to your external environment, think, and learn. When nerves become impaired, many body functions or quality of life can be affected.

To learn more about nerves, check out the links on the following page.

Getting on my Nerves

English is full of idioms related to nerves. "You've got a lot of nerve!" "He gets on my nerves." "You just have a case of nerves." These sayings come from alternate meanings for the word. According to the Online Etymology Dictionary, "nerve" has the following definitions: