by Kate Kershner Feb 23, 2017
We knew that fructose naturally occurs in things like fruit and honey, but the news that the human brain can produce it, too, was a surprise. Whitworth Images/Getty Images

It probably doesn't shock you to hear that sugar is being reframed as a villain in the American diet. But you might have to dig a little deeper to understand that sugars aren't all alike, and scientists are beginning to unravel more about how glucose, sucrose and fructose function.

One important new finding is that fructose, which is linked to obesity and diabetes, isn't just added to our bodies by guzzling sodas and snacking on sweets and fruit. Researchers observed for the first time that the brain actually can produce it, too, from the sugar glucose. And the brain isn't alone in its ability to generate fructose. This is bad news when you consider that excessive fructose consumption is a factor in high blood sugar and obesity and that limiting dietary intake of fructose may not entirely work.

The small Yale study gave eight healthy folks doses of glucose over a period of four hours. Using a neuroimaging method called magnetic resonance spectroscopy, they were able to see that the fructose levels in the brain rose with the glucose courtesy of the polyol pathway (the metabolic pathway allows for fructose to be converted from glucose, and diabetes researchers have long known about its existence). Meanwhile, participants' blood fructose levels experienced little change.

Research has shown that glucose sends the brain increased feelings of satiety, while fructose doesn't. So while it's not exactly heartening to learn that glucose consumption is producing fructose in the brain in humans as well as other animals, it might be great news for researchers who are trying to figure out how sugars in general affect the brain, and find some targeted advice and guidelines for sugar consumption.

NOW THAT'S INTERESTING
Fructose can be both a naturally occurring sugar and an added sugar. The FDA recommends no more than 50 grams, or 12.5 teaspoons, of added sugars for adults per day.

'Warm Snap': What Happens When Trees and Shrubs Flower Early?

How Processed Food Saved the World 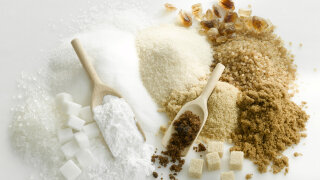