by Denise Harrison
Prev NEXT
9 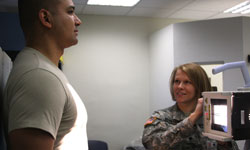 A therapeutic radiologist, also called an interventional radiologist, treats malignant disease, such as cancer, with radiation. This sort of radiation is used to both control and alleviate symptoms of the disease. While cancer is the most widely known use for therapeutic radiology, this specialist also helps stop abnormal bleeding, detects and treats blockages, treats aneurysms and can remove urinary stones.

As with practically all specialties, the Army says that when you become a therapeutic radiologist on the U.S. Army Health Care Team, you can join a ready-made practice with no overhead costs or malpractice insurance premiums.