by Becky Striepe
Prev NEXT
7 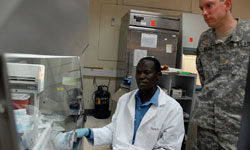 Army doctors rely on preventive drug therapy, or Chemoprophylaxis, to combat some location-specific diseases. Chemoprophylaxis might sound a lot like vaccination, but while vaccines shore up your body's immune system using parts of the microbes that cause illness, Chemoprophylaxis is a drug treatment that prevents disease or infection.

Malaria prevention is a good example of Chemoprophylaxis at work. It's common in tropical and semitropical locations, and it's a serious illness that can even lead to death. The best way to treat malaria is to never contract it in the first place, so Army doctors administer the drug Doxycycline if troops are in high-risk areas. The Army just started using Doxycycline in 2009. Before that, Army doctors relied on Mefloquine or Lariam, which had much stronger side effects, including lung tissue inflammation, anxiety and depression.

Beyond physical health, soldiers often struggle with psychological problems. Let's look as some common issues that troops face and how Army doctors handle them.