by Becky Striepe
Prev NEXT
5 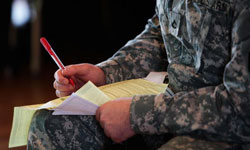 Medical screenings for both physical and mental problems are important. Here, an Army soldier fills out a questionnaire at a mental health screening in New York.
Chris Hondros/Getty Images

If you're in good general health, chances are your immune system is better equipped to fight off illness. Army doctors administer annual health exams to make sure that soldiers are up to date on vaccines and in good shape.

Annual checkups are great for prevention, but when troops are in the field, Army doctors are also keeping an eye on troop health to see if any illnesses pop up. These screenings are usually not as in-depth as the annual screenings and involve daily reports from personnel. Catching illness early not only makes it easier to treat the infected person, but it's also a warning sign for doctors who can take extra preventive measures to stop other soldiers from getting sick.

Next we'll look at biowarfare, a relatively recent concern for Army doctors, dating back to World War I.