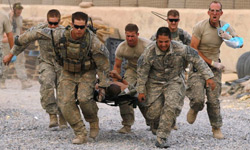 "War is Hell." Union General William Tecumseh Sherman's famous quote was inspired by his extensive experience in the field of battle, and he didn't want to gloss over its horrific nature in favor of vague platitudes of glory and honor. Instead, he wanted to warn a new class of military officers to avoid the suffering that comes from war if possible.

During wartime, the U.S. Army Medical Corps' field units face that human suffering on a regular basis. The dark television comedy "M.A.S.H." treated the experience of frontline Army field medics in a way people could relate to, and to be sure, the experience has a tremendous good side, as well. But what kind of challenges do real Army field medics face on the front line?