What equipment do Army combat surgeons have? 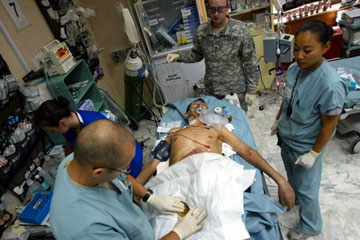 Combat surgery has come a long way since the unmedicated amputations of the Civil War. Here, U.S. Army Dr. Robert Mazur and his staff work on an Iraqi soldier with a bullet lodged in his heart at the 10th Combat Support Hospital in Baghdad, Iraq.
Robert A. Sabo/Getty Images

In the late 19th century, combat doctors often didn't have more than a tent as a makeshift hospital, with few lifesaving instruments or medicines available to them. The rescued wounded would be brought in by stretcher or horse-drawn wagon, where doctors would treat them with what they might have available, such as the following:

The manual of military surgery from 1861 recommends keeping just the essentials on hand:

Combat casualty care has come a long way since then. In the 21st century, military medicine has expanded beyond treating injured soldiers with morphine and watchful waiting. Today's Army has an estimated 120 active duty general surgeons (and about the same number of reservist general surgeons) [source: Gawande]. General surgeons are trained to operate on the gastrointestinal tract, the abdomen, breasts, the vascular system and the endocrine system. They perform organ transplants, manage surgical critical care and oncology treatment, and treat trauma and burn patients. And many have additional skills, training and experience in specialized areas. A combat-experienced trauma surgeon may be, for example, a vascular surgeon in the civilian world. General surgeons and orthopedic surgeons often work together as combat-surgery teams.

Whether combat-experienced surgeons find themselves in a combat zone or practicing in a military hospital, these surgeons must adjust for risk as well as for the environment. Let's take a look at the places you'll find combat surgeons and the types of technology available to them today. 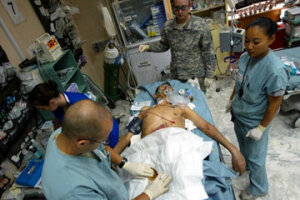 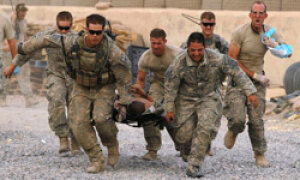