Ethics of Multiculturalism in Military Medicine

Browse the article Ethics of Multiculturalism in Military Medicine 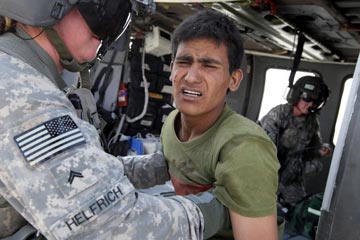 An injured Afghan National Army soldier is helped from a medevac helicopter, which transports casualties of war as well as sick and injured local residents.
Justin Sullivan/Getty Images

When human lives are in your hands, as is the case with physicians, the question of what is right and what is wrong becomes quite literally a matter of life and death. And the right choice isn't always easy to see.

This is why we have, for example, the American Medical Association's (AMA) Code of Medical Ethics, a body of work that defines honorable behavior for a health care professional.

The 1847 code of ethics from the fledgling AMA was a much shorter document than today's. Doctors were exhorted to unmask quacks and refrain from advertising and concocting their own patent medicines. Proper patient behavior was described as well -- stick to one doctor only, so he knows your whole history; tell your doctor all, including the embarrassing things (even you, ladies); and, our personal favorite, don't tell your doctor long, tedious tales.

These issues are, of course, still a concern (although the part about not irritating your doctor with your poor storytelling skills is no longer spelled out). Physicians continue to battle fraudulent medical practices -- for example, chelation therapy for autism, an expensive treatment that is only medically approved for heavy metal poisoning. And it's just as important that your treating physician have access to your entire medical history, only now we're hoping to accomplish the same thing through different means -- electronic health records, perhaps.

Today's code of ethics covers everything from reporting colleagues with substance abuse problems to accepting gifts, using placebos and do-not-resuscitate orders. Despite the many, many subheadings, this document and 1847's original version attempt to answer the same question: What is a doctor's responsibility to his or her patients?

The question is complicated when it comes to a military doctor. It may seem only like an exercise in philosophy until you take it to where it matters: the battlefield. If it comes down to a conflict between a soldier's duty and a doctor's ethics, who wins?

According to Victor W. Sidel and Barry S. Levy, in a chapter written for the Borden Institute's Military Ethics textbook, the "physician-soldier" is a "moral impossibility." To their point of view, medicine and the military are at cross-purposes -- they have different goals. "Concern for the welfare of the patient" and "concern for the effective function of the fighting force" cannot be equal masters. One must take precedence.

However, the editors of the same textbook disagree, writing that it should be "physician first, officer second," and that there aren't usually conflicts between medical ethics and military necessity. (They aren't entirely clear about what to do when there are.)

The Borden Institute, part of the U.S. Army Medical Department Center and School, publishes textbooks on military medicine that cover everything from combat injuries to military preventive medicine. Two whole volumes cover military medical ethics, which says something about how difficult it is to define black and white.

Say we have a soldier with a life-threatening wound and one with gonorrhea. Both need penicillin. We have only one dose.

The latter is what happened with U.S. troops during the North African campaign in World War II [source: Annas]. It's an example of military triage, and that mode of thinking is, arguably, incompatible with a physician's.

In the United States' current military conflicts, the debate has intensified. Military physicians force-feed hunger strikers at Guantanamo, which the AMA and the World Medical Association (WMA) both consider to be unethical [source: Annas]. Requiring military doctors to OK prisoners for interrogation and punishment is also against international standards of human rights.

The counterpoint to this is that war calls for desperate measures, and that in some circumstances, when the rights of one person are held up against what the military considers "the good of the country," the individual will, and should, lose.

But ethics doesn't cover just dark topics like torture. What else falls under the mantle of a physician's ethical responsibilities?

When we think of medical care, we picture pill bottles, bandages and surgical instruments. But, as we are just beginning to explore, good medical care takes into account much more than antibiotics. Multiculturalism is also a factor.

It's important to note that science-based medicine is a culture of its own -- and it's the minority view. In many places, germs aren't even considered to be the cause of disease. Instead, the cause of an illness might be pinpointed as sin, or perhaps it isn't an illness in need of treatment at all -- it's God attempting to speak through someone's body. Our culture determines our attitude toward disease.

Religion is tied strongly to physical well-being for people the world over. It isn't as strange as it might sound -- the first hospitals, after all, were founded mostly in monasteries, and missionaries hoped that sharing their medical skills would give them a chance to bring their religious messages to new converts.

But, often, people think of religious belief as an enemy to good medical care -- Jehovah's Witnesses who refuse life-saving blood transfusions, for example. It isn't that simple. Studies have shown a positive connection between strong religious beliefs and religious practices and health. In that case, a physician must take into account the perhaps surprising idea that ignoring someone's religious beliefs is neglecting their care.

We come back to the question from the first page: What is a doctor's responsibility to his or her patients? To give good care. And if it's true that what is best for a patient may not be a purely medical decision, then the need for cultural sensitivity must be emphasized. For example, if a Muslim is fasting for Ramadan, that might be a bad time to schedule certain surgical procedures. This doesn't mean that the Muslim person is making it more difficult to care for him or her, as medical culture may have shaped the physician to believe -- it means that doctor and patient have to work together to come to the best decisions.

This holds true for military medicine, as well. Even in a military culture that emphasizes oneness, there is diversity among the troops -- not to mention civilians and prisoners -- that a physician could be required to treat. In stressful situations like war, these differences actually become more, not less, important.

On the next page, we have links and resources to help you learn more about this complex issue.