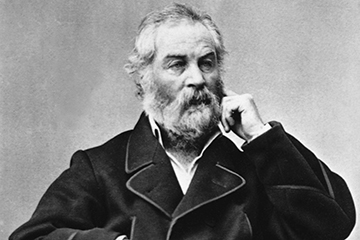 American poet Walt Whitman helped tend to the wounded during the Civil War.
Alexander Gardner/Historical/Thinkstock
Bearing the bandages, water and sponge, straight and swift to my wounded I go, where they lie on the ground after the battle brought in, where their priceless blood reddens the grass, the ground. – from "The Wound-Dresser" by Walt Whitman

December 1862, year two of the American Civil War: Poet Walt Whitman was looking for his brother George among the casualties. A newspaper listed the younger Whitman as wounded during a battle in Fredericksburg, Virginia.

Of the many horrific scenes Walt witnessed, one of the most jarring was a wagon piled to the brim with severed arms, legs and hands. To his surprise and relief, he ended up finding George alive and well, but by that time, Walt had seen too much to go back to his life in New York. He decided instead that he needed to help. Visiting the hospitals of Washington, D.C., daily, he tended to the young soldiers dying wholesale of sepsis and typhoid fever. Many of them had simply arrived at the hospital too late to get help [source: Murray].

Roughly a year later, in the early days of July 1863, the hills around the town of Gettysburg, Pennsylvania, were thundering with artillery fire. Through the smoke and chaos soldiers watched with amazement as a grim, bearded man on horseback rode the battlefield shouting commands to his men, heedless of the rain of bullets. The man was Dr. Jonathan Letterman, and his men were not combatants but medics bearing stretchers [source: U.S. Army]. In the thick of battle they were bravely collecting the wounded from the field with the aim of getting them to a medical facility as quickly as possible instead of waiting until the fighting was over. This was a radical new approach to battlefield care. It was here at Gettysburg that the American practice of emergency medical response was born [source: Werman].

The History of Emergency Medical Responders 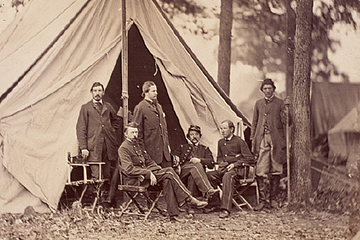 By the time Jonathan Letterman was promoted to major and made medical director of the Army of the Potomac in 1862, he had already been a military doctor for more than a dozen years. In that time he had served on the New Mexico frontier, where he had ample opportunity to witness the devastations of combat. The traditional practice was to wait until a battle was finished to collect the wounded. By that time it was often too late to help them.

As medical director during the Civil War, Letterman immediately began a complete restructuring of his resources from the bottom up. Among his many improvements, he brought the ambulance corps, which had taken its commands from a non-medical department, under his management. He made sure the customized ambulance wagons were supplied with stretchers, bedding, kettles, food, wound dressings and other medical supplies [source: U.S. Army].

Letterman realized that a key element to surviving trauma was speed. His ambulance corps must evacuate the wounded from the battlefield, provide basic first aid and get them to a medical facility as fast as possible. The procedures he set up to accomplish these feats are known as the Letterman System, and the principles behind it are used by emergency medical responders to this day. After the Battle of Gettysburg, the entire Union Army adopted the Letterman System.

The medical officers who deployed the Letterman System during the Spanish-American War of 1898 realized they could improve outcomes further by having the stretcher bearers apply bandages before they even moved the wounded. By World War I, the role of these field-dressing stretcher-bearers had become so crucial their role was formalized as army medics. As non-medical personnel trained to apply basic first aid on location, these medics were the direct prototypes for today's emergency medical responders [source: Margolis]. 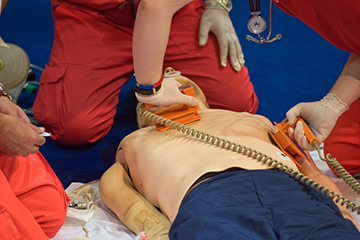 EMR training includes learning the basics of emergency care such as performing CPR and using a defibrillator.
microgen/iStock/Thinkstock

In 2010 the U.S. government restructured the national standards ratings for emergency response. The term "emergency medical responder" now refers to a volunteer who has received the highest level of emergency medical training. Once upon a time such people were called "first responders," but that term is now used as the general title for the first person or agency to show up at an emergency [source: Colorado First Aid].

Firefighters and members of a police force, for instance, often take training courses to become emergency medical responders. These training courses provide the basic skills necessary for helping victims of trauma. Acquiring these techniques is valuable not only to professional first responders but also to teachers, wilderness instructors, divers, fishermen, lumberjacks, pilots and flight attendants to name just a few.

A typical training course from the American Red Cross might take about 50 hours, during which trainees learn non-invasive procedures like how to assess patients, take their vital signs, manage their airways, perform cardiopulmonary resuscitation (CPR), deploy an automated external defibrillator (AED) and supply emergency oxygen. You have to be at least 16 to take and pass the course requirements, and the course itself might cost somewhere in the neighborhood of $400 [source: Center for Wilderness Safety].

EMRs in the Field 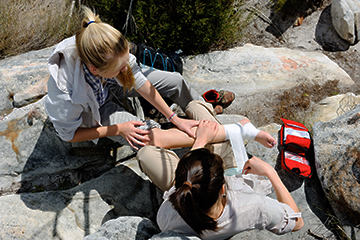 Wildnerness emergency training is incredibly important -- not only for hikers and campers, but also for people who live far from hospitals.
Warren Goldswain/iStock/Thinkstock

Sara Gosa, president of her high school Red Cross Youth Club in Los Angeles, got her EMR certification at the minimum age of 16 and immediately began putting it to use. As an EMR, she was qualified to volunteer to help staff Red Cross stations at a host of public events, including the famed Pasadena Tournament of Roses Parade. Although her duties there as a newly qualified EMR amounted to little more than ensuring that parade participants stayed hydrated, such small preventive measures can be important. Urban EMRs are often helpful aides to their more highly trained colleagues, like EMTs and paramedics. In fact, volunteering as an EMR is, for some, the first step on the road to becoming a professional medic.

But the farther outside city limits you go, the more crucial EMRs become. It's in remote locations that training as an emergency medical responder can be critically important. When you're deep in the forest cutting trees, or far down a mining shaft, or out in the northern tundra hunting or back-country hiking, the chances that there's a paramedic around are slim. Professional medical personnel go where the jobs are. But EMRs are a different matter. A relatively minor investment of time and money can gain you the basic skills that could mean the difference between life and death for a person who's injured far from professional medical care.

Wilderness EMR training takes longer than basic EMR courses. The Center for Wilderness Safety based in Sterling, Virginia, for instance, offers a 72- to 80-hour training course, usually spread out over eight or nine days. Within this format, instructors lead students through hands-on scenarios to help them learn how to deal with issues that apply to medical emergencies in remote locations — in particular, the need for prolonged patient care [source: The Center for Wilderness Safety].

When something goes wrong far from a hospital, it could take a long time before the patient reaches an emergency department. Sixteen-year-old EMR Sam Boas learned that the hard way in the Alaskan bush.

An EMR in Action 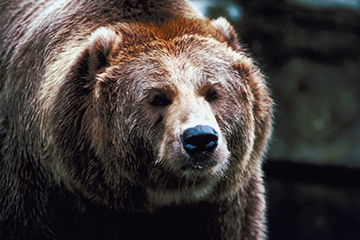 Although often adorable, grizzly bears are not looking for hugs when they charge at you.
Jupiterimages/Photos.com/Thinkstock

Luckily, Boas had just finished learning how to survive. He and six other teenage boys had reached the end of a month-long survival course, and as their final challenge, their instructors left them on their own with orders to rendezvous in several days at a prescribed location. The only advice the instructors gave them before parting was, "Don't die." That turned out to be a hard instruction to follow.

The group was just hours into their adult-free walkabout when the team leader, Josh Berg, rounded a tight bend to see what looked like a bale of hay a short distance ahead. The hay came barreling toward him, and all he could to do was yell, "Bear!" before all 500 pounds (226 kilograms) of it was on him. When the 7-foot (2.1 meter)-tall grizzly bit down on his skull, his friends could hear the crack over their own screams. After giving the 180-pound Berg a good shake, the bear dropped him and charged its next victim. In all, the grizzly took down four of the seven young men, cracking another skull and puncturing a lung before finally running off.

Boas, the EMR, concentrated on stabilizing Berg's neck and fractured skull in case of spinal injury, while the others treated the wounded as best they could. Luckily the group had an emergency location beacon, which they activated as quickly as possible to broadcast their location to the Alaska Rescue Coordination Center. They turned their tent into a field hospital where they monitored the injured and kept them warm as they waited to be rescued.

When the helicopter finally arrived, it wasn't equipped to take the two most severely injured teenagers. A second helicopter was to be dispatched and would arrive four hours later. In the meantime, the walking wounded got on board the first helicopter along with two of the three who weren't injured. Boas, the EMR, refused to leave the scene. Together with an Alaska state trooper, he stayed with his critically injured friends until they were evacuated. Incredibly, thanks in part to his efforts, everybody survived [source: Burnett].

When interviewed, one of Sam Boas's emergency services instructors back in Connecticut praised his student and pointed out that the story proved how a little bit of emergency medical training can go a long way. That's very true. It doesn't take too much time or money to learn how to save a life. The story of that bear attack both terrified and inspired me. On the one hand, the idea of being attacked by a giant grizzly in the middle of nowhere is completely petrifying. On the other hand, the manner in which those young men responded to the crisis is really impressive. I've already started looking into local EMR training courses.

How Ambulances Work
How do you know if you should go to the emergency room?
How Paramedics Work