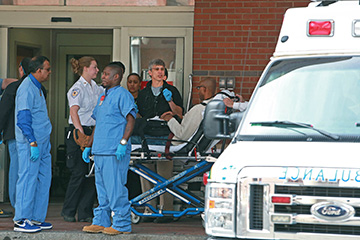 A man is wheeled into the Emergency Room (ER) of Boston Medical Center following the explosions near the finish line of the Boston Marathon in 2014. ERs do disaster drills to prepare for situations like this.
Jim Davis/The Boston Globe via Getty Images

The terrorist attacks of 9/11, the 1989 Loma Prieta earthquake, tornadoes, hurricanes, bombs and even winter storms: All of these things can and do cause massive damage to property and injuries to people. They can strike quickly and in some cases without warning, often leaving more people in their wake who need immediate medical attention than hospital emergency departments can routinely handle. So, how do emergency rooms tackle these and other mass disasters?

The key is planning and preparation. Just because each disaster — whether man-made or natural — is unique in terms of injuries, possible biohazards, location or any number of other variables, does not mean that pre-planning for disaster response isn't important. It is far more efficient to implement a plan — even one that must be tweaked to suit the circumstances — than it is to improvise from scratch once a disaster has occurred.

Let's look for a moment at what constitutes a disaster as opposed to an emergency. In terms of planning and preparation, a disaster is larger than an emergency. A disaster may disrupt essential public services such as transportation, communications, sanitation and health care, and it may involve unforeseen threats to public health [source: Gebbie and Qureshi].

Disaster planning is not just a good idea for hospitals and ERs. The Joint Commission on Accreditation of Healthcare Organizations mandates that hospitals develop disaster plans and carry out disaster drills [source: Zibulewsky].

Since 9/11, there has been a focus in the U.S. on planning for similar terrorist attacks, as well as for bioterrorism. This is in addition to the preparations ERs already have in place for natural disasters, such as tornados, hurricanes, even massive winter storms. Such preparations must be comprehensive, involving local, state and federal governments working together to ensure hospitals — including ERs — and other medical facilities have plans in place that integrate with other plans in the community.

During a disaster, it is critical that the vital agencies speak the same language and have the same expectations. An ER doesn't operate in a vacuum. The activities there are affected, for example, by the first responders, who often must perform field triage, determine if biohazards are part of the disaster and decide which hospitals the injured will go to. Or in a weather-related disaster, such as the winter storms that shut down the city of Atlanta in January and February of 2014, ER patients and personnel couldn't get home, and people who were not sick or injured flocked to local hospitals because the buildings were safe and warm [source: Vesely]. Helping people who are not patients is a large part of ER disaster planning. In the case of Atlanta hospitals, they coordinated with local police to get some of the non-patients home as overcrowding became a problem. These are just a few of the reasons an ER's disaster plan must be integrated with the hospital's plan, which, in turn, is integrated into the plans of the larger community.

Another important area of planning involves changing the mindset of ER personnel. A major disaster means that ERs must revise the way hospital personnel think about patient treatment. In the course of a normal day in an emergency department, perhaps as many as 10 medical professionals will work on one patient who is suffering a heart attack. During a disaster, the priority shifts to providing stabilizing treatment to the most people possible. Planning and disaster drills must include training in how to make this shift [source: Kalemoglu].

Once a disaster has occurred, ER personnel will generally have a few minutes at least before the first victims begin to arrive. During this period, the first order of business for an ER is to activate the disaster plan, which has been communicated to all personnel on all hospital shifts. It can be a challenge, hospital administrators admit, to ensure training takes place for evening and night shift employees, but it is essential that all have practiced so that everyone is familiar with their role in the plan. Drills should involve all of the personnel needed to ready the facilities, equipment and supplies to deal with large numbers of disaster victims.

It is not enough for the plan to require a triage area be set up, for example. The plan must also list the personnel, by job title, as well as who will be responsible for setting up and ensuring all the equipment and supplies are available.

At the same time, the disaster chain of command should be implemented within the ER. Most hospitals use the Hospital Emergency Incident Command System (HEICS), which was developed in California in the 1970s, as a framework for emergency management planning. HEICS lays out a clear chain of command, communication policies, prioritized actions, accountability, and standard words, phrases, even job titles for use during an emergency [source: Kalemoglu].

It's not only medical personnel who need to be familiar with the disaster plan; other hospital employees and even volunteers, such as psychologists and clergy need to be part of it, so that they are available to support family members and victims of the disaster. In general, a hospital's disaster plan should cover plan activation, a command center — which may be the emergency department — traffic flow, triage, decontamination, treatment areas, special areas such as waiting rooms and a morgue, and evacuation [source: Zibulewsky].

Once a plan is in place, drills, including drills for specific events, such as winter storms (the most common disaster in the U.S.) can help to ensure all ER personnel are aware of and comfortable in their roles. Drills can also identify potential problems or holes in the plan.

In the event of a disaster, ER personnel should immediately begin implementing the plan, which may include clearing as many patients as possible from the ER by discharging them or admitting them to the hospital. That way, disaster victims can be handled efficiently upon arrival. Other areas of the hospital should be readied for use in case the number of victims exceeds the number of ER beds.

A triage area has to be set up. Depending on the type of disaster, patients who are not critically injured may arrive first in their own cars or on foot if the event happened close by. Later, victims with more serious injuries will begin arriving by ambulance. Setting aside adequate space for the orderly flow of these patients should be part of the plan.

While areas are being prepared for disaster victims, other personnel, also named in the plan, should be assessing, gathering and managing pharmaceuticals, perhaps from a dedicated stockpile. Pain medications, antibiotics and tetanus shots are the most commonly needed items during disasters. Other supplies — like gowns, gloves and masks — should be collected and distributed as necessary.

Additional medical personnel may be needed to handle the surge in patients. They'll need to be called in as soon as the disaster event is identified. Anesthesiologists, orthopedists, trauma surgeons, even obstetricians are just some of the additional doctors that may be required, along with extra nurses and technicians. The disaster plan should include a procedure for determining who is needed and how and by whom they will be contacted.

Mass disasters, especially in the U.S. are uncommon events, which can lead to complacency and apathy and result in hospitals being ill-prepared should one occur. Fortunately, facilities now routinely develop disaster plans and hold regularly scheduled disaster drills to ensure the highest level of preparedness to treat victims should the worst happen.

The complexities of hospital disaster planning were nearly overwhelming as I researched and wrote this article. But I found myself feeling calmer as I read more and more about the emphasis placed on disaster planning at hospitals and by other essential organizations. While I know that you can't always be prepared for everything, it seems as if we are in pretty good hands should a disaster strike.

How Mobile Medicine Works
10 Tips to Get You Through a Trip to the ER
What Happens When Your Insurance Says Your ER Visit Was 'Avoidable'?