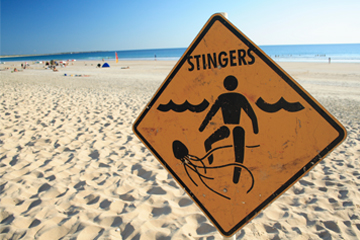 Peeing on a jellyfish sting might make the situation worse.
Pete Karas/Getty Images

Jaime hails from a landlocked state, so she was convinced a vacation at a tropical beachside resort would be memorable. And it was — just not in the way Jaime expected.

As she took a sunset stroll on the beach, she gazed out at the waves. Just as she was contemplating a permanent move to the island, a streak of stinging sensations went zinging through her nervous system. Looking down, Jaime noticed scores of translucent jellyfish scattered along the beach in the fading light. They were as small as her fist, and each new wave brought in a fresh supply.

Jaime mentally ticked through her first-aid repertoire. She knew how to take cover in a tornado, survive a hailstorm and treat frostbite. Dealing with a jellyfish sting, however, was not in her wheelhouse. The only thing she could remember was a scene from her favorite TV show, "Friends." When Monica got stung on the leg by a jellyfish while at the beach, Chandler peed on the sting in order to relieve her pain. But was that really the right course of action?

No, says the American College of Emergency Physicians. Home remedies for jellyfish stings, including urinating on the sting, are less effective at relieving pain than rinsing the wound and applying lidocaine. Lidocaine, a topical anesthetic, will dull and neutralize the sting of a jellyfish. And it's not just urine that's ineffective when it comes to treating jellyfish stings. Other home remedies, such as vinegar, rubbing alcohol and baking soda, may actually make the pain worse [source: ACEP].

A closer look at the jellyfish's stinging mechanism sheds light on why contact with these innocent-looking gelled orbs is so painful. Jellyfish tentacles are lined with cnidocyte cells. Within these cells are nematocysts, venom-filled barbs that can pierce human skin in a split second and cause painful blistering.

Peeing on these blisters isn't the key to lessening the pain. In fact, urine is likely to change the makeup of the cells around the site of the sting and may cause more of a problem. Any remaining nematocysts that haven't yet deployed their venom may do so when peed upon.

Instead of going No. 1, it's a good idea to thoroughly rinse the stung area with saltwater — but only after removing any stray jellyfish tentacles [source: Frost].