Browse the article Womanikin: Overcoming the Stigma of Breasts and CPR 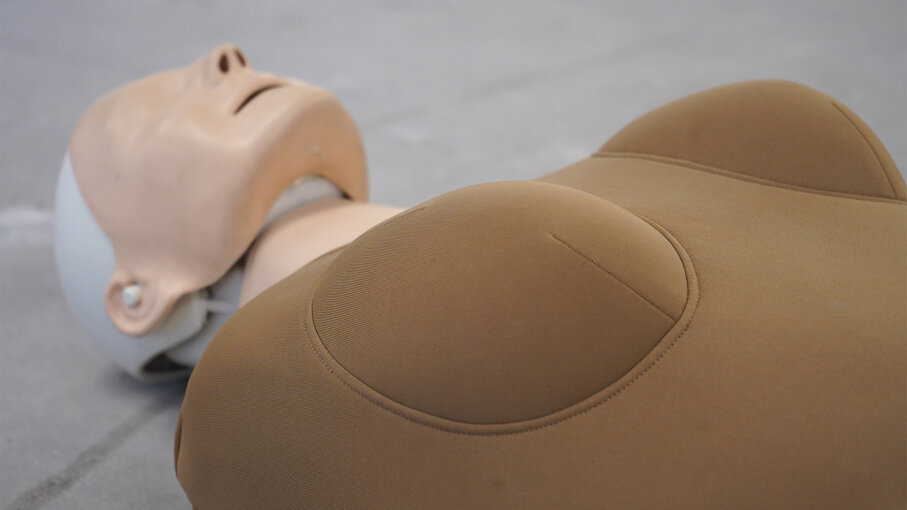 The Womanikin is a fabric add-on that bestows a standard CPR dummy with breasts in order to teach CPR in a way that keeps people from being afraid to perform the life-saving procedure on women. Jaime Robinson/JOAN

Breasts, to put it mildly, can sometimes get in the way. They're the recipients of much unwanted attention (and, just to be fair, some wanted attention), they can make it hard to find properly fitting clothes and they require all kinds of special and sometimes unpredictable maintenance. They can cause back pain, can hurt during exercise and can be strapped down by bras, which are often uncomfortable and almost always expensive. All of this is inconvenient and annoying, but not really a matter of life and death.

But did it ever occur to you that breasts might be the reason that you might not be administered CPR if you need it? It's true. One New York-based creative agency is taking the initiative to try to change that.

Fear of Touching a Stranger's Breasts

The problem is this: Those who have formally or informally learned CPR, or are at least confident enough to attempt it in a situation where it might do more good than harm, are overwhelmingly comfortable only if the chest of the person in need of CPR is reasonably flat — in other words, if it resembles CPR dummies or stick figure diagrams. Female breasts get in the way, and research shows that those who would be inclined to perform CPR on a cardiac arrest victim in need are less likely to do so if there are breasts complicating the situation. Since it's mostly women who have breasts, it's mostly women who are subject to this kind of (probably) unintentional discrimination.

How much of an impact does this have? Research indicates women are 27 percent less likely to receive CPR if they suffer a cardiac arrest incident in public. Since prompt administration of CPR is key in such situations, that could be a matter of life and death.

Now, we have the Womanikin, a training bra of sorts to help bring equality to CPR. The Womanikin is a fabric add-on that bestows a standard CPR dummy with breasts, so people can learn CPR in a way that keeps them from being scared to perform the life-saving procedure on approximately half of the adult population. The idea is to get people used to the idea that performing CPR on a woman means that, yes, there will be some hand-to-breast contact.

"The Womanikin is a self-funded project by our team at JOAN designed to improve CPR education by getting trainees accustomed to performing CPR on bodies with breasts," says JOAN co-founder and chief creative officer Jaime Robinson, via email.

"There are so many ways women are treated differently, and this resulted in them dying in the streets with nobody rushing in to help," Robinson says. "It seemed like an issue that was solvable and comes directly from a lack of education and awareness that performing CPR on a woman is a normal and necessary thing."

The Womanikin took about four months to develop, from the time the JOAN team first came up with the idea to its reveal in June 2019.

Of course, JOAN enlisted the help of medical experts to ensure the Womanikin is as useful and accurate as possible. That included Dr. Audrey Blewer, the author of the study that inspired the entire endeavor, who is currently an epidemiologist and resuscitation scientist at Duke University. JOAN "shared the process" with Blewer and acknowledged the team was fortunate to have that opportunity. JOAN's team also worked closely with other doctors and experts in CPR, including the New York-based Frontlines CPR, a school that was closely involved throughout the process, and the United State of Women, a national organization that connects and amplifies the work of organizations and individuals who are addressing inequities.

These partnerships ensure that the Womanikin is properly designed and has the credibility necessary to get it into the right hands, to make an impact as intended.

JOAN isn't finished with the Womanikin — in fact, the hardest part may be yet to come, convincing gatekeepers that it's necessary and useful, despite the overwhelming evidence that women are currently underserved in this area. JOAN's team says that they hope to get Womanikin into every CPR school in the country by next year, motivated by a goal that cardiac intervention saves lives. Furthermore, JOAN isn't driven by profit. Robinson says that the idea was to make the Womanikin as easy to replicate as possible to encourage widespread adoption, and thus, its pattern is up for grabs (so to speak) for anyone, with open-sourced plans available for free download.

"Part of JOAN's mission is to put products and services out into the world that help bring about better outcomes for women. And we'll hopefully keep developing ideas just like this with clients and without," Robinson says.

Now That's Interesting
One of the elements of this story that initially caught my eye is that JOAN Creative initiated the Womanikin project simply out of an opportunity and a need to do good. It's unusual, but not unheard of, for creative agencies to spend time and resources on internal projects that aren't funded by a client. Usually, the goal for such a project is publicity, and to be sure, there's an element of that in the Womanikin story, but in this case, there may be a measurable improvement in women's lives, and the saving of them, as well.