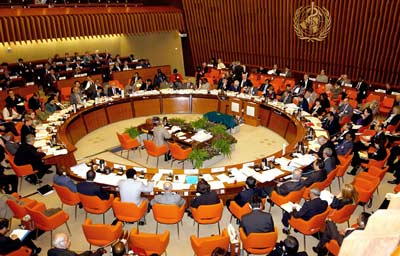 The World Health Assembly is the main governing body of WHO. It's made up of delegates from all member nations, currently totaling 192. The assembly meets in May each year, usually at WHO headquarters in Geneva, Switzerland.

At this meeting, it reviews and approves the budget for the coming year, decides where WHO will direct its attention for that year, and, if necessary, elects the executive board and the director-general. The matters that come before this central policy-making body are decided by the executive board.

The executive board is composed of members elected from among the assembly for three-year terms. They are technically qualified in the health field, and are usually doctors. They hold their main meeting in January, at which they decide on the agenda and the matters to be pursued at the May assembly meeting.

Session of the 112th Executive Board, May 2003
Photo courtesy WHO; Photo by P. Virot

The board advises the assembly and facilitates its work; it nominates the director-general and recommends focus areas. The board and assembly's work is in turn facilitated by the secretariat, which sees to all the day-to-day tasks that ensure that the decisions of the assembly are acted upon. 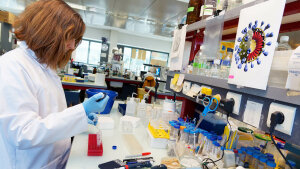