How can a diet pill make you feel full? 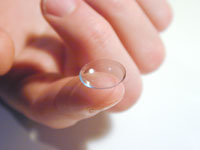 The pill is made from a hydrogel compound. A hydrogel (related to gelatin or food thickeners like agar) is an incredibly absorbent material with a stunning variety of applications. In the case of the diet pill, the hydrogel is safe and eventually passes through the body, though researchers don't currently know how long the pill retains the absorbed water. Still, Professor Ambrosio and his team believe that if a dieter takes the pill with water before a meal, the stomach would be partially filled by the liquid-filled blob and the dieter would eat less before feeling full.

Hydrogels are already used in many fields. Professor Ambrosio and his colleague Luigi Nicolais have discovered that their hydrogel could be used to treat edemas (or spots of excessive accumulation of fluid in the body). Hydrogels already exist in wound dressings, where they help to keep moisture on a wound and to clean away bacteria and dirt.

Farmers and gardeners use hydrogels, too. Many agricultural products use hydrogels to slow down water absorption in soil. These products, when spread across a crop, help to retain water and nutrients. The boost in water retention allows farmers to use less water and to irrigate less frequently.

Hydrogels could potentially be used for time-released watering of plants. Imagine dropping a hydrogel "sack" of water in a pot where it slowly releases its contents before dissolving away.

The list of products using hydrogel technology goes on, and some of them might surprise you. They include:

So the expanding diet pill seems to have some formidable technology behind it. But what about just eating less? And haven't we heard of something like this before? In the next section, we'll answer those questions.