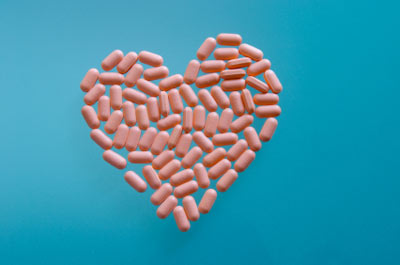 Medications can help alleviate the symptoms of heart failure, but they can't cure it.
© istockphoto/erichood

Heart failure is a chronic, progressive condition in which a damaged heart fails to beat as well as a normal heart. As a result, the body's cells are not able to get the blood and oxygen they need to function properly. Among people over 65 years of age who are admitted to the hospital, heart failure is the most common diagnosis. And because the American population is aging, the number of heart failure diagnoses is increasing every year.

Symptoms associated with heart failure include:

As the heart becomes unable to effectively pump out the blood that enters its chambers, fluids tend to build up in the body, a condition called fluid overload that's responsible for many of these symptoms. Improving heart function along with reducing fluid overload can dramatically improve these symptoms. Let's take a look at the kinds of drugs that are most commonly used to treat heart failure, and then see how they're used.

The Goals of Heart Failure Treatment

Diuretic drugs help the kidneys excrete more sodium in the urine. The sodium, because it associates with water, takes excess water with it. The reduction in the amount of fluid flowing through the blood vessels reduces pressure on the blood vessel walls. Doctors will probably suggest that a patient taking diuretics should make some changes in his or her lifestyle, such as eating a low-sodium diet.

There are three main classes of diuretic medicines, each of which works a little differently.

Diuretic drugs sometimes become less effective over time, resulting in a condition called diuretic resistance. In some instances, diuretic resistance is treated with a non-drug therapy called ultrafiltration in which the excess fluid is filtered out of the blood.

On the next page we'll learn about how and when doctors usually prescribe these drugs.

A variety of new agents are under investigation for the treatment of lung congestion and fluid overload for patients with acute heart failure. Many of them are in preclinical and clinical phases of testing, and some have shown interesting beneficial effects.

The Course of Treatment for Heart Failure

Treatment of mild heart failure usually starts with an ACE inhibitor, the most common vasodilator drug for heart failure patients. Studies have shown that ACE inhibitors are beneficial for treating heart failure symptoms and prolonging the life of patients with chronic heart failure. They also help increase the excretion of sodium and water, helping to reduce fluid overload.

One of the next steps is often the use of a type of negative inotropic drug called a beta-blocker. Studies have shown that beta-blockers can benefit heart failure patients by improving their symptoms and heart function, and, in some cases, the chance of survival.

In more severe heart failure, a diuretic is added. Even if diuretics alone controls a patient's symptoms, they should be used in combination with an ACE inhibitor and often a beta-blocker. A thiazide diuretic may be sufficient -- if not, a loop diuretic is used.

Doctors usually start patients on a low dose of a diuretic and increase the dose until the effective range is reached. When the diuretic is working effectively, the patient will lose weight because of fluid loss. If a patient doesn't respond even to high doses of a diuretic, a doctor will often prescribe intravenous administration or more than one diuretic. Sometimes diuretics work better in combination. Patients are usually maintained on a diuretic, once it is working, to prevent episodes of fluid overload. Periodic adjustments may be needed in the dose, and care must be taken to prevent side effects like:

If heart failure is so severe that a combination of an ACE inhibitor and a diuretic fails to relieve symptoms, digoxin, the most commonly prescribed positive inotropic drug, may be added. Studies have shown that digoxin can reduce the symptoms of patients who are already receiving diuretics and ACE inhibitors. The prolonged use of other positive inotropic drugs has been shown to increase the risk of death in some heart failure patients -- so they should only be used for acute or end-stage heart failure.

For more information about heart failure treatments and medications, take a look at the links on the next page.

ACE inhibitors and beta-blockers have clearly been shown to improve survival in patients with heart failure. Their use requires careful attention to dose and monitoring of the patient's condition. The use of diuretic drugs and, less frequently, digoxin, can also lead to an improvement of symptoms.

Could Phage Therapy Fight Superbugs?
What's the Deal With the New Statin Recommendations?
What is the future of minimally invasive surgery?